Historically, some of the most active local groups in California have been in San Diego, Los Angeles, Santa Clara, San Francisco, Alameda, and Riverside counties. 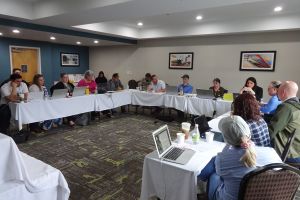 Jia Christopher was an At Large Member until her resignation 20 March 2022; the Executive Committee appointed Victoria Lapacek, who had been 2nd Alternate, to fill that position on 25 March, and then appointed Graham Brown to fill the 2nd Alternate position on 31 March.

Rachel Nyx was Vice-Chair until her resignation July, 7 2022; the Executive Committee appointed Adrian F Malagon, who had been Northern Area Coordinator, to fill that position on July 10, 2022.

Adrian F Malagon was Northern Area Coordinator until his resignation July 11, 2022 to focus on his new role as Vice Chair; the Executive Committee appointed Elizabeth Stump, who had been an At Large Member, to fill that position on July, 16, 2022.

Elizabeth Stump was an At Large Member until her resignation on July 16, 2022 to focus on her new role as Northern Area Coordinator; the Executive Committee appointed Graham Brown, who had been 2nd Alternate, to fill that position on July, 22, 2022.

Graham Brown was 2nd Alternate until his resignation on July 22, 2022 when he was appointed an At Large Member; the Executive Committee appointed Garrison Ham, to fill that position on August, 4, 2022.

California was one of the earliest state affiliates, being recognized some time in 1972. (This affiliation was unsuccessfully challenged at the LNC Meeting 25 November 1972.) The first state convention was held in 1973. Up until 1980 the LP was not a "qualified party" under California election law, so Libertarians who ran for partisan office appeared on the ballot as independent candidates. 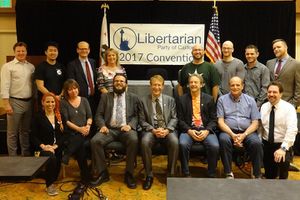 California voters may register as affiliated with a political party. The LP is the 4th largest party in the state by registration, after Democratic, Republican, and American Independent. Libertarian registration increased about 40% from the 2016 to the 2020 presidential election, and by 2021 the count of registered Libertarians was over 200,000.