Records of "dues-paying membership" and the related category of "central committee membership" have not been maintained and reported consistently through the LPC's history. For some periods, only fragmentary information is currently available, though it is possible that further research will turn up more information.

There has been some sort of dues-paying membership since the beginning of the LPC. The very earliest reports of the number of "Libertarians" in California would actually be referring to national membership, since the LPC was not formally organized until 1983. But since that time, except for the years that the LPC participated in the Unified Membership Program, state and national membership have been separate, and the counts of members of these two types have often been significantly different.

Sometimes everybody who "paid dues" or contributed an equivalent amount of money to the LPC was included in counts of "members", whether they satisfied any other requirement for formal membership or not. Sometimes more specific definitions were reported along with the number (e.g., "total contributors"), sometimes not. But most of the time the "membership" counted this way was only slightly higher than the count that was (or would have been) reported on the basis of a more formal definition of "member", so such counts are roughly comparable to the others.

Since the unification of the Libertarian Party of California and the California Libertarian Council in the early 1980s, the term "central committee member" has been used to refer to people who either (1) pay dues, sign the certification regarding initiation of force, and are not registered with another party or (2) qualify for this category through election under the state election law. This is not exactly the same thing as the term '"dues-paying member" would suggest, since people who qualify by election wouldn't necessarily also pay dues. However the number of people who qualified only in this way was always a very small fraction of the total. A further complication is that for most of the LPC's history it was not practical to track the actual voter registration status of people who paid dues, so the reported counts of central committee members might well have included some people who were not strictly qualified (because they were registered with another party, but the person maintaining the LPC's database did not know that). But the number of such cases has also always been a very small fraction of the total. So as a practical matter, the counts of "central committee members" and (state-level) "dues-paying members" have tracked each other closely enough that they can be considered the same for the purpose of comparison with other kinds of counts, or with each other over time. 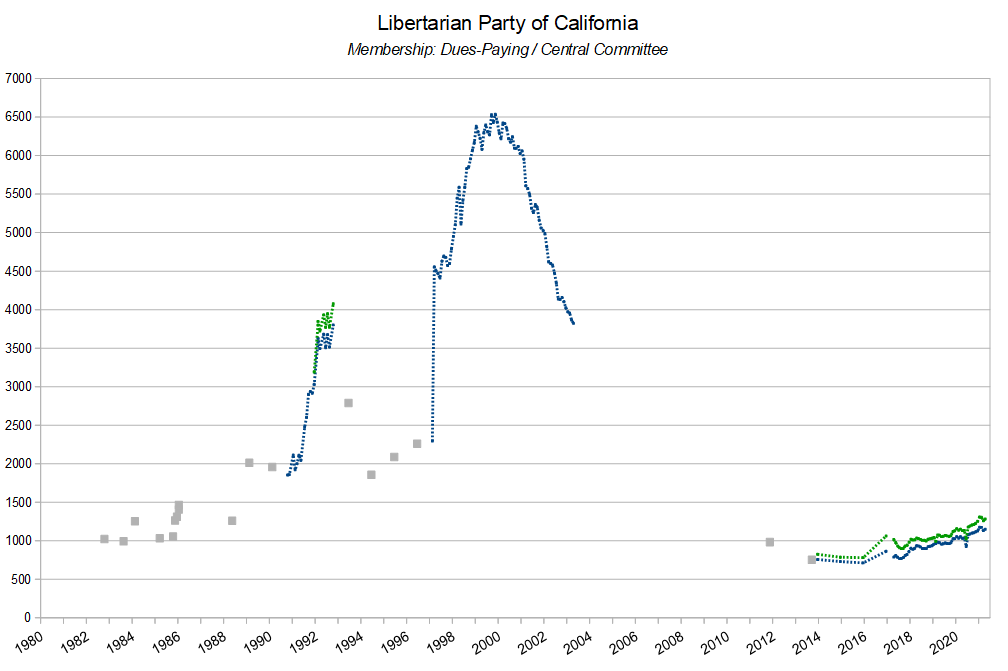 Sections of this graph where counts were available as part of a periodic series that appear to be comparable over time are shown as a curved line. A blue line represents central committee membership. For periods when a larger number of contributors who did not all qualify as voting members was also available, a second line is shown in green.

Other data points, shown as small gray squares, are numbers taken from a variety of types of other reports, and in general the specific definition of membership that was used is not known.

In addition, various "premium" levels have been offered from time to time, but these had no effect on a person's voting status or the reports of the number of members. 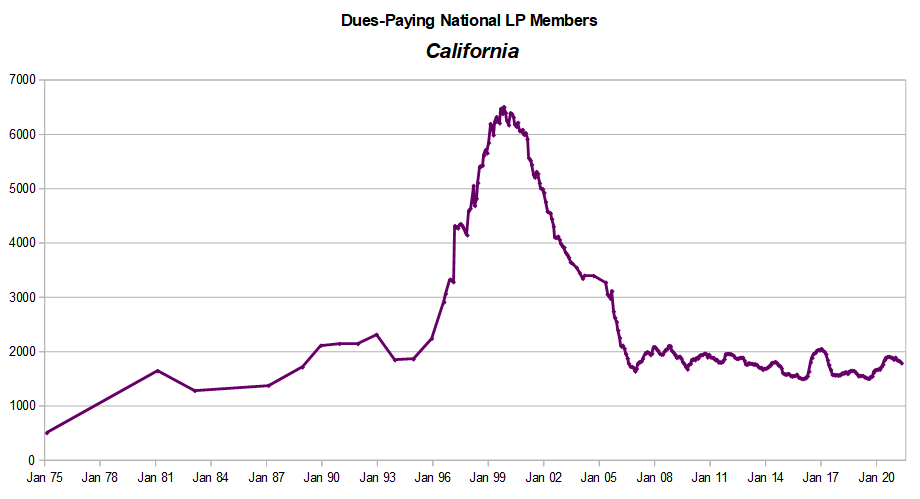 Note: The exact way that the national party determines who is a dues-paying member for various purpose has varied over the years, and currently there are at least two counts regularly published. This graph is based on the traditional count of individuals who have signmed the membership certification and are "current" on their dues (including life members). A different rule, used for purposes like allocation of national delegates, usually gives a slightly lower number, but the two measures roughly track over time.