This convention made a number of changes to the LPC Bylaws and Convention Rules, most notably the elimination of a separate state Platform. There were elections for members of the Executive Committee and the Judicial Committee, as well as for California's representative and alternate on the LNC, and California's delegates to the 2022 National Convention. 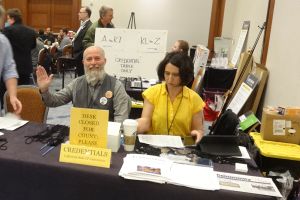 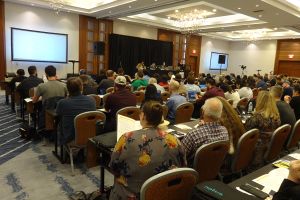 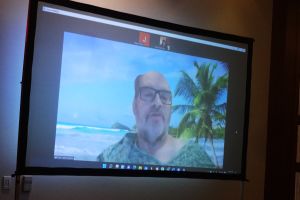 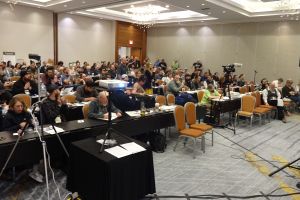 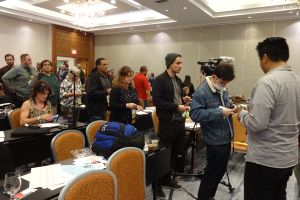 delegates lined up to vote 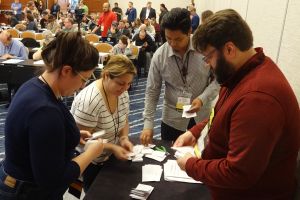 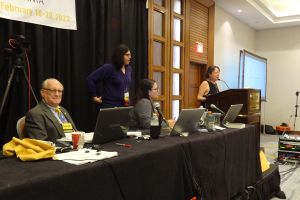 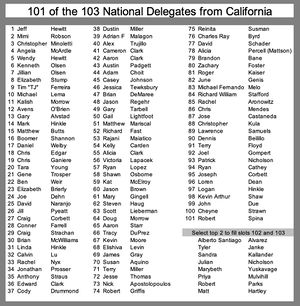 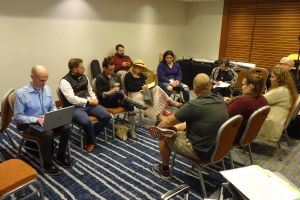 The following reports were heard on Saturday morning:

The report of the Platform Committee recommended adoption of a change to the Bylaws to say that the national Platform serves as the LPC's platform, and to eliminate the Platform Committee. The report also contained approximately 100 proposals to amend the state platform by deleting each existing plank and adding new planks, most of which would be simply references to existing national planks, plus a few "California-specific" planks.

A minority of the members of the Platform Committee, disagreeing with this approach, made their own report of the traditional type, proposing modification of existing planks along with a few new ones.

The result of these actions was to eliminate the existing Platform and Platform Committee, making the rest of the proposals relating to the Platform moot.

In addition to the amendments mentioned above relating to the Platform, the convention considered proposals contained in the report of the Bylaws Committee along with several others which had been presented with advance notice.

There being only one candidate, Joshua Clark was elected by voice vote.

State convention delegates cast ballots to select the 103 California delegates to the national convention to be held Memorial Day Weekend. Results were tabulated after the close of convention, with 101 delegates being selected and eight candidates tied for the remaining two positions; two of those were later selected to be delegates by the state Executive Committee. The remaining candidates who received a net vote ('yes' votes minus 'no' votes) of at least three were listed as alternates. 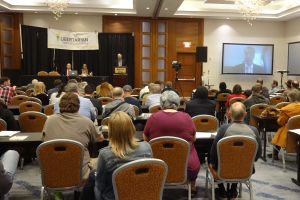 The following speakers were featured during various events associated with this convention:

A discussion for leaders of county organizations, moderated by Kevin Moore, was held after the end of the Saturday business session.

A debate among three candidates for National Chair -- Steve Dasbach, Tony D'Orazio, and Angela McArdle -- was held Saturday evening before the banquet.

A program of affiliate and candidate training was offered on Monday at the same location.