Chuck Moulton (b. March 5, 1979) is a libertarian activist, attorney, economist, old school gamer, and geek from Pennsylvania. He was Vice-Chair of the LNC from 2006 to 2008. He also was Chair of the Pennsylvania LP, the Virginia LP, the national LP Bylaws Committee, and the national LP Judicial Committee. He created the LP Facebook page, which currently has over 700,000 likes. 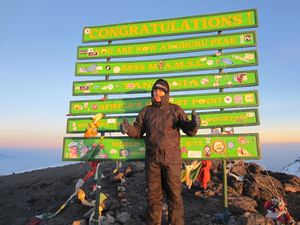 Chuck Moulton was born on March 5, 1979 in Blue Bell, Pennsylvania. He graduated from Wissahickon High School[1], where he was active in debate club, won numerous gold medals in academic decathlon's statewide competition, and developed a novel mathematics formula published in The Mathematics Teacher[2]. In high school he was campaign manager for a nerdy friend successfully elected junior and senior class president, overcoming the usual popularity contest with catchy slogans and bold promises. As a Boy Scout in Ambler's Troop 3[3], he enjoyed hiking and camping, was elected senior patrol leader, attained the rank of Life, and was a member of Order of the Arrow.

Moulton attended Rochester Institute of Technology[4] in upstate New York. In 2001 he earned a B.S. in computational mathematics (a mix of mathematics and computer science) and was president of the chess club. While at RIT, Moulton immersed himself in computer science, gaining proficiency in numerous programming languages and attending the DefCon[5] and HOPE[6] hacking conferences. For the next year he took computer networking classes, then certified in Novell, Cisco, and Microsoft.

Next Moulton attended Villanova University School of Law[7] in suburban Philadelphia, earning his J.D. in 2006. While at Villanova, he was elected 1L representative to the student bar association (student government) and was active in the Federalist Society. Moulton interned at the Cato Institute[8] during his final semester of law school. He was admitted to practice law in Pennsylvania (2006), New Jersey (2006), and California (2007). He became a Professional Registered Parliamentarian (PRP)[9] in 2009.

Due in part to his libertarian activism, Moulton became interested in economics. He had not taken a single economics course in university, so he moved to Alabama to take introductory courses at Auburn University[10] and frequently attend lectures at the Mises Institute[11]. He continued his education in California, earning a M.A. in economics from San Jose State University[12] (a very Austrian economics / free market department). While there he served as a teaching assistant for Jeffrey Rogers Hummel and was active in the Saturday Night Anarchy Club (run by Ed Stringham). Moulton then earned a Ph.D. student in economics at George Mason University[13], where he again was president of the chess club. His dissertation research focused on money without government (bitcoin, free banking, financial privacy, etc.), under the direction of his advisor Larry White. 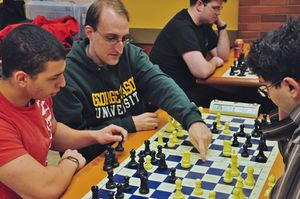 While a graduate student at GMU, Moulton taught undergraduate classes in Money & Banking, International Economics, and Mathematical Economics. Cato Unbound featured him as a bitcoin expert in its July 2013 issue[14]. He started a group blog with free banking / sound money experts at freebanking.org[15], which was later merged into the Cato Institute's Center for Monetary and Financial Alternatives (CMFA)[16] and re-branded as alt-m.org[17].

Moulton is a life member of MENSA[18] and the Triple Nine Society[19]. He enjoys math problems, logic puzzles, and deep conversations about ideas or futuristic technology.

Chuck Moulton is an avid chess player. He mostly plays a chess variant called bughouse[20] (2 boards and 4 players) on chess.com[21], which he streams on Twitch[22]. He also plays bridge[23], poker, Resistance[24], and Diplomacy. Moulton juggles (balls and clubs), unicycles[25], camps, and hikes.[26] In 2012 he climbed Mt. Kilimanjaro. 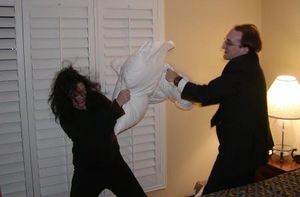 Moulton was Chair of the Pennsylvania LP in 2006. Previously he served as Secretary, Election Committee Chair, and Montgomery County Representative. In 2005 he sent out a candidate recruitment letter mail merged with local offices up for election by precinct; several Libertarians were elected to partisan office as a result. He left Pennsylvania in 2007 for educational opportunities in Alabama, California, and Virginia, then returned in late 2016. Moulton now again serves as Election Committee Chair and is actively recruiting candidates for local partisan office -- with the expectation of electing a lot of Libertarians.

When Moulton lived in San Jose attending SJSU, he served as an At-Large member of the California LP Executive Committee.

Moulton was Chair of the Virginia LP from 2012 to 2014. He also served as 10th CD representative and 11th CD representative to the state central committee (his apartment flipped during redistricting) and as Secretary to the Northern Virginia LP. He created the Virginia LP's Facebook page[27], which was the largest state LP page for several years. Moulton wrote a program[28] to populate the database with election districts from U.S. Congress down to precinct (including school board, town council, etc.) for free and leveraged it to recruit the most active slate of general assembly candidates in a decade. 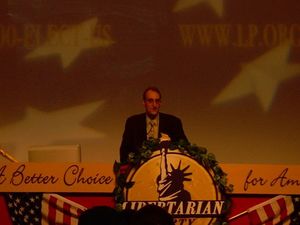 Chuck Moulton was elected Vice-Chair of the LNC in 2006, defeating M Carling and Tony Ryan. While Vice-Chair (2006-2008), he chaired one full LNC meeting (Chair Bill Redpath away on his honeymoon) and one half LNC meeting (Redpath left early post-convention to catch his flight). He was Chair of the LNC's IT Committee that term. Moulton ran for Vice-Chair again in 2008, but was beat by Michael Jingozian. In 2014 he ran for Secretary of the LNC, losing to Alicia Mattson. Before his term as Vice-Chair, he served a term (2004-2006) as Region 5 East Alternate (under Representative Dr. James Lark) -- elected by the members of his region at his first national convention. Moulton is known for the LNC vote charts he distributes to national convention delegates to increase transparency. 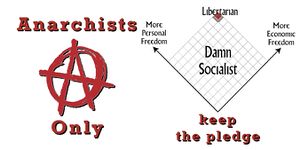 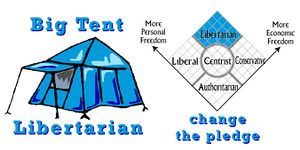 He is currently Chair of the LP Judicial Committee. In 2016 only three people received a majority vote for the Judicial Committee: Alicia Dearn, Gary Johnson (of Texas), and Chuck Moulton. None had served on the JC before. They filled the four vacancies with Michael Badnarik, John Buttrick, Bill Hall, and Rob Latham.

Moulton was the founding Secretary of the Libertarian National Congressional Committee (LNCC) and originally conceived of the idea. He is no longer involved with the organization.

Largely responsible for the "Portland Purge" in 2006, Moulton developed and printed all the stickers and literature for the Reform Caucus that advocated a big tent LP open to everyone in the libertarian quadrant of the Nolan Chart. They were unsuccessful in removing the membership pledge, but nonetheless convinced delegates to vote against retaining all of the platform planks.

Very active on Facebook and computer savvy, Moulton created the national Libertarian Party Facebook page[29], which now has over 700,000 likes. He administered it for the first year, then turned it over to LPHQ. Staff members Mark Meranta, then Kyle Hartz, then Wes Benedict managed the page. Later LNC members Arvin Vohra and John Jay Myers took over administration from staff and developed the extensive volunteer network that now works like a well-oiled machine. Moulton chose the Facebook URL "libertarians". He worked with Arvin behind the scenes to build armies of specialized LP volunteers through Facebook groups, including attorneys, programmers, and more. He also started the LP LinkedIn group. 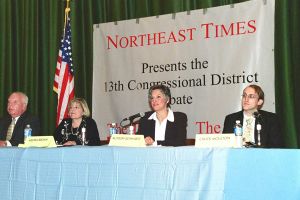 Chuck Moulton ran for U.S. Congress (Pennsylvania district 13) as a Libertarian in 2004 (then 25 years old). He participated in 5 televised debates with his Republican and Democrat opponents, set up hundreds of yard signs, and spread the libertarian message in numerous newspaper, radio, and television interviews.

Chuck Moulton was elected Judge of Election of Whitpain 2, Montgomery County, PA in 2017. A Judge of Election is the head poll worker of a precinct, who administers elections on primary day and election day for a 4 year term.[30] All elections in Pennsylvania are partisan.