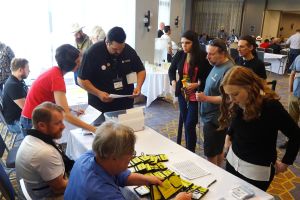 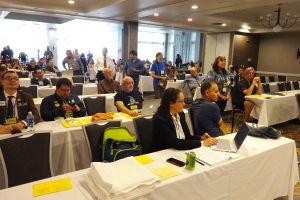 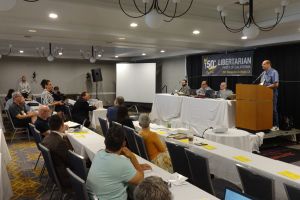 The Northern Area Coordinator did not present a report.

Announced Candidates Prior to the Convention 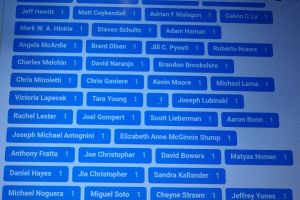 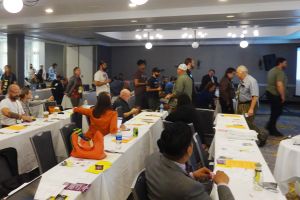 The election for Chair was conducted in one round, using IRV:

The election for Vice Chair was conducted in one round, using IRV:

The election for Secretary was conducted in one round, using IRV:

The election for Treasurer was by voice vote as there was only one candidate (Paul Vallandigham).

The election for Northern Area Coordinator was conducted in one round, using IRV:

The election for Central Area Coordinator was conducted in one round, using IRV:

The election for Southern Area Coordinator was conducted in one round, using IRV:

There were a total of six at-large positions to be filled on the Executive Committee (four as regularly scheduled, two for the remainder of the term for two members who had been elected in 2020). In the first round delegates were allowed up to six votes, and four candidates received the support of a majority, filling the four full-term slots:

The candidate with the lowest vote total was dropped and a second round was conducted with the remaining candidates, with delegates allowed up to two votes, but no candidates received the support of a majority:

The three candidates receiving the two lowest vote counts were dropped, leaving three candidates on the ballot, and a third round was conducted with delegates each allowed to cast up to two votes; two received the support of a majority and filled the remaining (one-year) slots:

A separate election was held for At-Large Alternates, with delegates allowed to cast up to two votes; two candidates received majority support and were elected:

Amendments to the Bylaws and Convention Rules 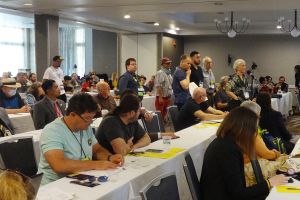 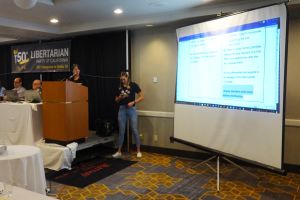 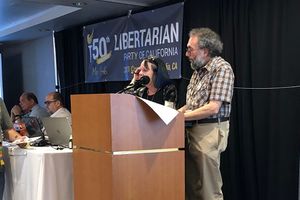 Recommendation 1, lowering the requirements for amending the bylaws, was adopted without change.

Recommendation 2, requiring that central committee members live in California and be registered Libertarian if eligible, was adopted with three amendments: to add a proviso that the change would take effect at the end of the convention, to restructure the list of requirements to make the intent clear, and to make explicit that life members retain their membership.

Recommendation 3, changing the schedule for the Bylaws Committee to report, was adopted without change.

Recommendation 4, making dues sharing 50% in all cases, was adopted without change.

Recommendation 7, changing Judicial Committee procedures, including requiring a written report and creating the position of JC alternate, was adopted with two changes: to leave unchanged the rule that two JC members may approve considering a case and to remove a phrase about the amount of detail in the report; the language was then further amended to require that in cases involving suspension of membership, if the member requests it, the JC's report be reported to the next convention in executive session.

Recommendation 10, dealing with voluntary resignations of membership, was adopted without change.

Amendments to the Platform

The Platform Committee consists of a Coordinator (position currently vacant) and representatives from each county organization.

The following candidates for public office were endorsed at this convention: 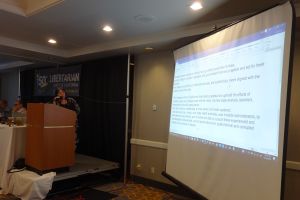 Resolutions on the following topics were adopted by the convention:

The following speakers have been mentioned as appearing at this convention: