The Libertarian Party of Colorado (LPCO and formerly the Colorado Libertarian Party "CLP") is the state affiliate of the Libertarian Party for Colorado. Colorado is one of the original affiliates and was formed and active by the time of the first convention. It was officially affiliated on 11/25/72 at the LNC Meeting 25 November 1972 as per Document:LP News 1972 November Issue 11. Party co-founder David Nolan had served multiples on its boards and various committees. The state of Colorado has very generous rules for recognition as a minor party, requiring only 1,000 continuous voter registrations, and is of course, the birth place of the Libertarian Party. The LPCO is consistently in the top ten of affiliates by national membership size and since 2016 has maintained a Libertarian voter registration of over 1% of the registered voters.

Prominent Past Board Members 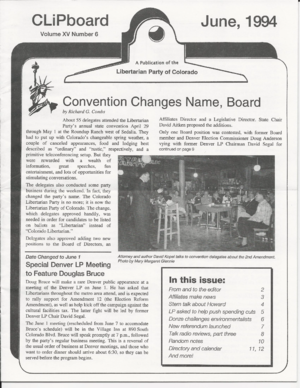 Main article: Libertarian Party of Colorado Board Past Officials

Please do not delete or alter this data without understanding it.

Due to the tireless efforts of many, and noteably David Aitken, Minor Party Bill (HB98-1110) was signed into law in 1998, creating arguably the easiest ballot access for minor parties in the country. See: Libertarian Party of Colorado Ballot Access History. 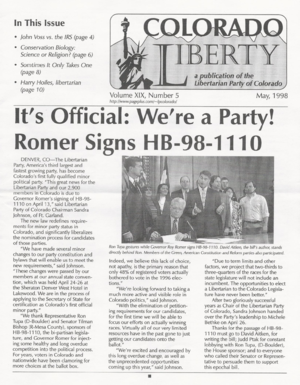 The new law redefines requirements for minor party status in Colorado, and significantly liberalizes the nomination process for candidates of those parties.

"We have made several minor changes to our party constitution and bylaws that will enable us to meet the new requirements," said Johnson. "These changes were passed by our members at our annual state convention, which was held April 24-26 at the Sheraton Denver West Hotel in Lakewood. We are in the process of applying to the Secretary of State for certification as Colorado's first official minor party."

"We thank Representative Ron Tupa (D-Boulder) and Senator Tilman Bishop (R-Mesa County), sponsors of HB-98-1110, the bi-partisan legislature, and Governor Romer for injecting some healthy and long overdue competition into the political process. For years, voters in Colorado and nationwide have been clamoring for more choices at the ballot box.

Indeed, we believe this lack of choice, not apathy, is the primary reason that only 48% of registered voters actually bothered to vote in the 1996 elections."

"With the elimination of petitioning requirements for our candidates, for the first time we will be able to focus our efforts on actually winning races. Virtually all of our very limited resources have in the past gone to just getting our candidates onto the ballot."

"We're excited and encouraged by this long overdue change, as well as the unprecedented opportunities coming up this year," said Johnson.

"Due to term limits and other factors, we project that two-thirds to three-quarters of the races for the state legislature will not include an incumbent. The opportunities to elect a Libertarian to the Colorado Legislature have never been better."

After two gloriously successful years as Chair of the Libertarian Party of Colorado, Sandra Johnson handed over the Party's leadership to Michele Bethke on April 26.

Thanks for the passage of HB-98-1110 must go to David Aitken, for writing the bill; Judd Ptak for constant lobbying with Ron Tupa, (D-Boulder), the House sponsor; and to everyone who called their Senator or Representative to persuade them to support this epochal bill.

Voter registration statistics as reported by Ballot Access News from 1995 forward and dehnbase.org/lpus/library/registration.html from 1980 - 1994. Voter Registration for 2004-present are from November months from http://www.sos.state.co.us/pubs/elections/VoterRegNumbers/VoterRegNumbers.html

a Convention held jointly with Alaska and Wyoming

d Convention moved to online due to COVID-19 Pandemic.[41]

The Constitution was merged into the Bylaws in 2021, so it no longer exists.

All links that begin with https://d3n8a8pro7vhmx.cloudfront.net are dead (they refer to our old Nationbuilder site) and need to be replaced.