The Libertarian Party of Puerto Rico was reestablished in 2008 with a noticeable web presence that promotes Libertarian solutions. Its present leadership is difficult to identify.

Its previous iteration was founded in 1997 in Santurce, Puerto Rico. It included talk radio host Frank Worley and statehood activist Jose Julio Diaz. This version of the organization fell apart by the end of 1999. 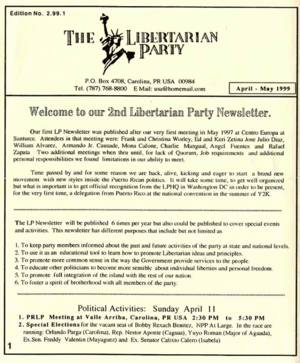 There was a print newsletter in the late 1990s, which was mailed to members. It had at least two issues: May 1997 and April/May 1999. A bilingual LPPR website was designed and operated by member William Alvarez between 1997 and 1998. However, no archives of it are known to exist.