He was selected as the interim first national chair by the steering committee and served until the 1972 Libertarian National Convention.

Nolan was born on November 23, 1943 in Washington, D.C. He attended the Massachusetts Institute of Technology and graduated in 1965 with a Bachelor's degree in political science. 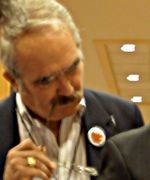 Nolan pondering a suggestion at the 2008 national convention in Denver.

"The Essence of Liberty"

As a founder of the Libertarian Party and editor-in-chief of California Liberty, I am often asked how to tell if someone is "really" a libertarian. There are probably as many different definitions of the word "libertarian" as there are people who claim the label. These range from overly broad ("anyone who calls himself a libertarian is one") to impossibly doctrinaire ("only those who agree with every word in the party platform are truly annointed").

My own definition is that in order to be considered a libertarian, at least in the political context, an individual must adhere without compromise to five key points. Ideally, of course, we'd all be in agreement on everything. But we're not, and probably never will be. Debate is likely to continue indefinitely on such matters as abortion, foreign policy, and whether, when, and how various government programs can be discontinued or privatized. But as far as I'm concerned, if someone is sound on these five points, he/she is de facto a libertarian; if he fails on even one of the five, he isn't. What then, are the "indispensible five" -- the points of no compromise?

YOU OWN YOURSELF First and foremost, libertarians believe in the the principle of self-ownership. You own your own body and mind; no extermal power has the right to force you into the service of "society" or "mankind" or any other individual or group for any purpose, however noble. Slavery is wrong, period.

Because you own yourself, you are responsible for your own well-being. Others are not obligated to feed you, clothe you, or provide you with health care. Most of us choose to help one another voluntarily, for a variety of reasons -- and that's as it should be -- but "forced compassion" is an oxymoron, a contradiction in terms.

THE RIGHT TO SELF-DEFENSE Self-ownership implies the right to self-defense. Libertarians yield to no one in their support for our right as individuals to keep and bear arms. We only wish that the Second Amendment to the U.S. Constitution said "The right to self-defense being inalienable..." instead of that stuff about a "well-regulated militia". Anyone who thinks that government -- any government -- has the right to disarm its citizens is NOT a libertarian!

NO "CRIMINAL POSSESSION" LAWS In fact, libertarians believe that individuals have the right to own and use anything- gold, guns, marijuana, sexually explicit material- so long as they do not harm others through force or the threat of force. Laws criminalizing the simple possession of anything are tailor-made for police states; it is all too easy to plant a forbidden substance in someone's home, car or pocket. Libertarians are as tough on crime- real crime- as anyone. But criminal possession laws are an affront to liberty, whatever the rhetoric used to defend them.

NO TAXES ON PRODUCTIVITY In an ideal world, there would be no taxation. All services would be paid for on an as-used basis. But in a less-than-ideal world, some services will be force-financed for the foreseeable future. However, not all taxes are equally deleterious, and the worst form of taxation is a tax on productivity -- i.e., an income tax -- and no libertarian supports this type of taxation.

What kind of taxation is least harmful? This is a topic still open for debate. My own preference is for a single tax on land. Is this "the" libertarian position on taxes? No. But all libertarians oppose any form of income tax.

A SOUND MONEY SYSTEM The fifth and final key test of anyone's claim to being a libertarian is their support for an honest money system; i.e. one where the currency is backed by something of true value (usually gold or silver). Fiat money -- money with no backing, whose acceptance is mandated by the State -- is simply legalized counterfeiting and is one of the keys to expanding government power.

The five points enumerated here are not a complete, comprehensive prescription for freedom... but they would take us most of the way. A government which cannot conscript, confiscate, or counterfeit, and which imposes no criminal penalties for the mere possession and peaceful use of anything, is one that almost all libertarians would be comfortable with.

This article is a biographical stub.
You can help LPedia by expanding it.