NEW! Policies and style guides are in development.   You can find them here:

NOTICE: Unless otherwise specified, all newly created articles are licensed under the terms of Creative Commons Attribution (CC-BY) 4.0 with attribution assigned to LPedia. Other options are available. See this page for more information.

Please note that there is presently a transition from Creative Commons Attribution-Noncommercial-Share Alike 3.0 and work on tagging all articles still controlled by its terms is still underway.

DO NOT add any content to any pages on this wiki that you do not wish to offer under the relevant terms and/or lack the authority to release under these terms! 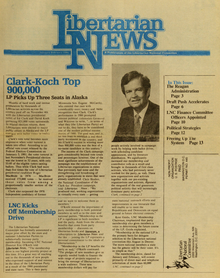 Months of hard work and intense preparation by thousands of Libertarian activists across the country paid off on November 4th with the Libertarian presidential ticket of Ed Clark and David Koch garnering 921,000 votes nationwide. In related election returns, three Libertarians were elected to major public offices in Alaska and the LP emerged with ballot status in twelve states.

Clark's vote total becomes more impressive when voter turnout is taken into effect. According to an official vote count released by the Federal Election Commission on Janauary 5, 1981, the voter turnout in last November's Presidential election was the lowest in 32 years, ...

Check your state party article. Is it up to date? Do you know information about its history or some of its past chairs, officers, and the like that can be added? Do you have information on a topic listed on one of these lists? Can you think of things to add to one of those lists?

Go here for a crash course on simple wiki editing. Don't be afraid to make a mess at first -- getting the information here is the hard part. You or someone else can tidy things up later.

If you don't have access to any records, you can use the Internet Archive to search for information posted on the web since 1996. A hopefully helpful guide is located here.

You can decorate your user page with Wikipedia-style userboxes.

Where to Find Things