see List of Chairs of the Libertarian Party of Iowa

Other Past Officers and State Executive Committee Members

see List of Past Officers and State Executive Committee Members

The Libertarian Party of Iowa was founded in April of 1975, four years after the national party, by a small group of mostly young adults dissatisfied with the direction our country was heading. Dr. Bill Bockhoven was our first Chairman. Other members included Bill's wife Doris, John Ball (our first governor's candidate), Gary Roewe, Ben Olson, his mother, Dorothy, and two others. These members promoted Libertarian ideals by speaking to small groups throughout the state and running for public office. They were active in Ed Clark's 1980 presidential campaign, helping him earn the second highest percentage vote totals for any Libertarian presidential candidate.

The party dissolved in 1985 when several of the founding members began families or moved out of state. The party also faced financial problems.

Members of the National Libertarian Party living in Iowa came together to reestablish the state party with a new charter in 1987. Previously, memberships in the national and state party were separate. A new program called the United Membership Program (UMP) allowed members to join both parties for a single fee with the proceeds being split evenly and the national party handling the record keeping and renewal functions.

Over the next 15 years, the party continued to grow in membership and won several local elections. In 1996, LPIA had approximately 80 dues-paying members. The party's first official newsletter was named “Prairie Fire”. In the 1990s the name was changed to “Libertarians in Action” (LIA) because an Iowa socialist group had also begun using the name “Prairie Fire". From the 1990s and throughout the 2010s, 500 printed copies of Libertarian's in Action were mailed out to members and interested people, quarterly and bimonthly. “LIA” is no longer published.

In 1997, www.lpia.org was launched to promote party principles and events. This web page remains the official party page. A Facebook presence began in 2006.

In 2002, Clyde Cleveland of Fairfield spent a year traveling the state, raising nearly $70,000 dollars for his campaign for Iowa Governor. He recruited members to run for nearly every statewide office and authored a book, Restoring the Heart of America. Hughie Tweedie of Montrose also ran a very active campaign for State House. Because of their efforts membership in the state party swelled to over 250 in 2004.

The national party decided to end their UMP policy in 2005. Members could no longer pay a single fee to become a member of both the state and the national parties. This confusion caused membership in the state party to fall to only 23 members in July of 2006. According to former LPIA Secretary Kevin Litten, the party had no money coming in to run its functions. The bylaws were rewritten to include voting (dues-paying) or supporting members. An effort was made to inform members of the change and recruit expired members. By the end of 2006, voting membership was back up to nearly 100. The party had to cease its 500+ newsletter mailings and the Executive Committee lost some key members after a disagreement over dues.

In 2005, with the help of the ACLU, the Libertarian Party of Iowa and the Green Party sued the Secretary of State’s office over ballot access. In 2007, the Secretary of State’s office settled the lawsuit and in 2008, Iowan’s could register as Libertarians. The state offered the Iowa LP Non-Political Party Status (NPPO) beginning in January 2008. By the end of 2008, the party had nearly 1100 voters who had switched their registration to LIB (Libertarian Party).[3] In 2014, Secretary of State candidate Jake Porter uncovered a database error that was preventing thousands of Iowans to register as members of the Libertarian and Green parties. The issue was resolved with help from the Iowa Senate Democrats.

In 2016, Presidential candidate Gary Johnson received over 2% of the vote in the general election which gave the party major party status which allows the party to hold special conventions and primary elections. In 2017, Bryan Jack Holder became the first Libertarian to run as a major party candidate in his special election for Iowa House District 22. As of November 2017, the party had 9,517 registered Libertarians in the state. In order to maintain major party status, the party must receive at least 2% in the race for Iowa Governor in 2018. Former Secretary of State candidate Jake Porter is facing Marco Battaglia in the first Libertarian Primary for Governor.

1979
A chapter is formed at the University of Iowa called Hawkeye Libertarians by Randall Grant and Michael Lewis.[4]

1985
The Libertarian Party of Iowa files dissolution paperwork with the Iowa Ethics and Campaign Disclosure Board when party Chair Michael Lewis moved out of state.[5]

1987
The party takes out an ad in the Cedar Rapids Gazette on March 11, 1987, and announces that it will be reorganizing with Tim Hird as the acting state chairman 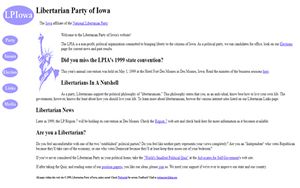 2005
The ACLU files a lawsuit against the Iowa Secretary of State's office to allow Iowans to register as members of the Green and Libertarian parties.

2007
The Iowa Secretary of State settles the lawsuit filed by the ACLU and allows Iowa voters to register as members of the Libertarian and Green parties. [6]

2014
Jake Porter runs for Secretary of State and works with the Iowa Senate Democrats and the Iowa Secretary of State's office to fix a database issue at the Department of Transportation which prevented thousands of Iowans from registering as members of the Libertarian and Green parties.
Douglas Butzier was killed in a plane crash in Dubuque weeks before the election while flying back from Des Moines while campaigning for U.S. Senate.[7] 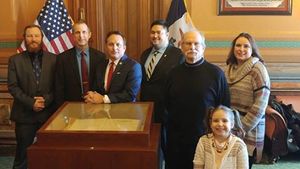 Libertarian Party of Iowa files for major party status in 2017.
Bryan Holder becomes the first Libertarian to run as a major party candidate in the Iowa House District 22 Special Election. [8]