The Bylaws and Rules Committee recommends bylaw amendments and convention rule amendments to the assembled delegates during national conventions. Those amendments are then debated and voted on by the delegates at the National Convention 2018.

Joshua Katz was elected chair of the committee and Aaron Starr was elected secretary. Mr. Katz later resigned from the Committee, and Mr. Bishop-Henchman assumed the chairmanship.

Caryn Ann Harlos and Joe Bishop-Henchman worked out a compromise agreement to support (or not oppose) proposals that were important to each of them. This resulted in the closing of the alleged back door to get around the 7/8 requirement to amend the Statement of Principles. 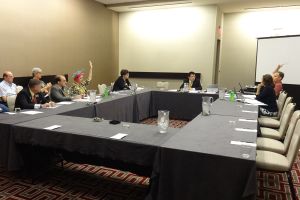