The 1974 Libertarian Party National Convention adopted the Dallas Accord which sought to accommodate supporters of both anarcho-capitalism and minarchism. It was held in Irving Texas near Dallas in June.

Ed Crane of California and Scott Royce of Virginia competed for the Chairmanship. Crane won garnering over 80% of the vote.

A major debate in the campaign centered around the proposed location of the national headquarters of the LP.

Andrea Millen, former Chairwoman of the FLP in New York, won an unopposed term as Vice-Chairwoman. 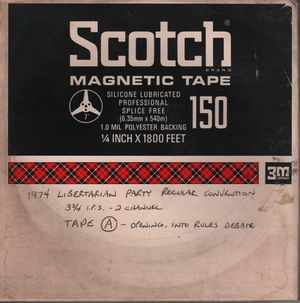