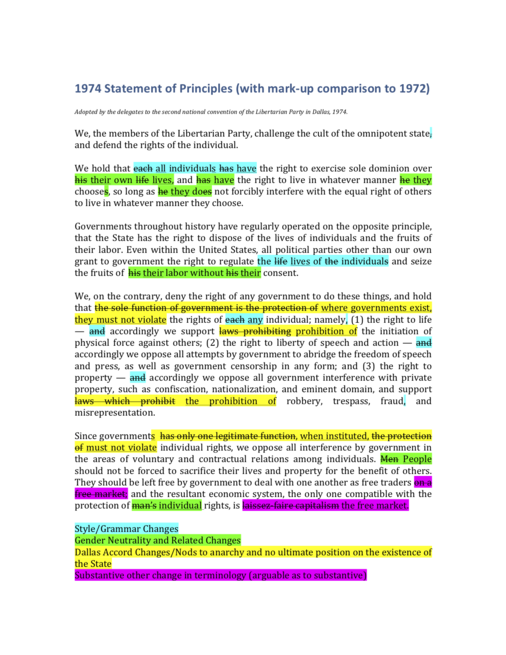 The Dallas Accord consists of both formal and informal agreements made at the 1974 Libertarian National Convention, and also refers more broadly to the idea of the Libertarian Party remaining neutral with regard to whether the ultimate goal of the party is a world of limited governments or none at all. The Wikipedia page on this topic is woefully incomplete and misleading.

The accord was a compromise between members of the party's larger minarchist and smaller anarchist factions who were desirous to reach some kind of accommodation in order to avoid a split in the new party. Steps taken to implement the accord involved amending the Platform and the Statement of Principles to refrain from explicitly stating whether it was desirable for the State to exist.[1][2][3][4][5]

The formal agreement involved amending the Statement of Principles in order to expressly allow for anarchist thought within the Party and changing the role of any existing state from a positive duty to a negative one and officially adopting a position of agnosticism on the ultimate existence of the state by using such language as "where governments exist, they must not violate the rights of any individual" and "Since governments, when instituted, must not violate individual rights."[6] The informal agreement included an agreement for the Platform planks to follow suit and that all official debates and statements as to whether or not a state must or must not exist as an "end game" would be tabled until such time as a minimal state might be achieved.[3][7]

The purpose of the Dallas Accord was to make the Libertarian Party a "big tent" that would welcome more ideologically diverse groups of people interested in reducing the size of government. At that time, the Platform underwent several related changes which deleted the phrase "The protection of individual rights is the only proper purpose of government" from Individual Rights and Civil Order and added the word "existing" to the Trade and Economy plank as follows: "The only proper role of existing governments in the economic realm is to protect property rights, adjudicate disputes, and provide a legal frame- work in which voluntary trade is protected. All efforts by government to redistribute wealth, or to control or manage trade, are improper in a free society." [8] Whether or not any portion of the informal agreement was ever binding, or remains in effect as the wording of the Platform planks changed, remains disputed, and Party members and candidates have certainly felt free to argue for their perspectives on the debate.[9][10][11] The official Libertarian Party website follows the Statement of Principles in stating, "We believe that government’s only responsibility, if any, should be protecting people from force and fraud."[12] Further, the Statement of Principles is a permanent part of the Platform and contains the edits made in 1974 and thus any apparent stepping back of those statements in the planks must be considered as transient statements or practical positions given the current fact of the state.

During the following years the number of anarchists in the party dropped by about half as more conservative-oriented members joined.[3][13] During the 2006 Libertarian National Convention delegates deleted a large portion of the more detailed Platform then in existence. They also re-added the phrase "Government exists to protect the rights of every individual including life, liberty and property."[14] This wholesale gutting of the 2004 Platform resulting in more or less entirely rebuilding a platform from scratch has been described as the "Portland Massacre". Some took it as meaning the Dallas Accord was dead.[3] Delegates tried in 2008 to restore the previous Platform, without success. However, the only formal agreement from the Dallas Accord, that of the amended Statement of Principles, remains in effect as required by the National Party Bylaws[15] which further makes the Statement of Principles the ideological foundation of the Party. However, any implicit agreement that the Platform itself outside of the Statement of Principles would use the term "existing government(s)" was violated by the 2008 changes. The importance of the reversal of that language remains in dispute.

Up until National Convention 2018, the Criminal Justice Plank stated "[t]he prescribed role of government is to protect the rights of every individual including the right to life, liberty and property” which is used as further argument that the Dallas Accord has been abrogated. Party anarchists assert that since the Platform may not contradict the Statement of Principles as amended in 1974, as well the Platform’s overtly stated transitory nature, such a statement does not entail the necessity of the state, merely the limitation of its role when it does exist. Others argue that the Party’s Statement of Principles gives support for "the prohibition of the initiation of physical force against others," and "the prohibition of robbery, trespass, fraud, and misrepresentation" with the implication that a state would be required; however, the original language of the Statement of Principles from 1972 in which those items would be enforced by “laws” was struck by the amendments made in 1974 so opponents of this view would say this is not a valid conclusion.[16] The edits to the Statement of Principles made in conjunction with the 1974 Libertarian National Convention remain unchanged. However, that potentially problematic language was amended, with the Platform Committee specifically arguing that it could be interpreted as violating the Accord to the following language, "Government force must be limited to the protection of the rights of individuals to life, liberty, and property, and governments must never be permitted to violate these rights."[17]

Anarchists do continue to work in the party and run for office,[13] and the activity of the anarchists in the Party is on the upswing with the re-establishment of the LPRadicals, Libertarian Socialist Caucus, and Audacious Caucus. Planks within the current party Platform, remains largely open to either an anarchist or limited government interpretation. One plank mentions the "right to alter or abolish government" and another states that, "Our silence about any other particular government law, regulation, ordinance, directive, edict, control, regulatory agency, activity, or machination should not be construed to imply approval." [18] Further, a Preamble added to the Platform in 1984 paved the way for Platform planks to be transitory by explicitly stating with regards to the Platform planks that “These specific policies are not our goal, however. Our goal is nothing more nor less than a world set free in our lifetime, and it is to this end that we take these stands”, leaving the Statement of Principles to be the determinative statement of Party goals.[19]

Click here for full PDF of marked-up copy showing differences between the 1972 and 1974 Statement of Principles prepared by Caryn Ann Harlos.

Dallas Accord researcher Caryn Ann Harlos produced a commentary on the effects.