Edward Harrison "Ed" Crane III (born August 15, 1944) was chair of the Libertarian National Committee from 1974 to 1977. He also served as National Director. He is a co-founder and longtime president of the Cato Institute.

Crane was influenced by the writings of F. A. Hayek, Ludwig von Mises, and Ayn Rand. In 1964 he was a Goldwater precinct campaign for two precincts in Berkeley. He ran for student body president at Berkeley on a platform of abolishing the student government. He often said that reading The Conservative Mind by Russell Kirk convinced him he wasn’t a conservative.

In 1972 he attended the founding convention of the Libertarian Party and came away as the campaign manager for vice-presidential nominee Tonie Nathan, who became the first woman and first Jewish person in history to receive an electoral vote. He served as National Chair of the party from 1974 to 1977. He recruited Roger MacBride, a lawyer and protégé of Rose Wilder Lane, to be the party’s 1976 nominee, and after the 1975 convention became a full-time party chair and campaign manager.

He went into investment management after college, first at Scudder Stevens & Clark and then at Alliance Capital Management (later AllianceBernstein), until he left in 1975 for what turned out to be permanent libertarian work. 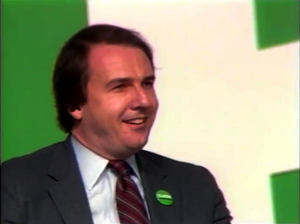 This article has almost no content.
You can help LPedia by adding something to it.