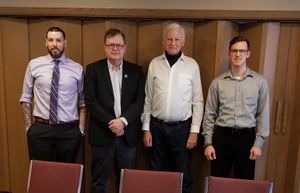 Peter Olausson was appointed Temporary County Chair for the Steuben County Libertarian Party on February 12, 2017 and worked to establish the affiliate. He was successful, and the affiliate held its first convention on February 10, 2018, in which Olausson was elected chair. The State Committee charted the affiliate on April 9, 2018. During the Larry Sharpe campaign, they held several events and were among the counties with the highest percenage of vote for Sharpe. When the Libertarian Party of New York restructured in late 2018 and early 2019, Olausson was appointed as the County Contact for Steuben County, in which the counties had to reform as Interim County Orgnaizations under the new rules. In late December 2020, Olausson resigned as the County Contact. Presently, there has been no attempt to revive the affiliate.