From LPedia
(Redirected from LNC)
Jump to navigation Jump to search

As currently configured, there are four officers (Chair, Vice-Chair, Secretary, and Treasurer), five at-large members, and normally nine Regional Representatives, for a total of 18 members. (There is a theoretical maximum of 10 regions, but since each must contain at least 10% of the membership the practical maximum is nine). In addition, there are alternates who may substitute for regular members who are unable to attend a particular meeting.

The LNC generally assembles several times per year for an in-person meeting, but can also transact business between meetings by e-mail.

The LNC serves as the Board of Directors of Libertarian National Committee, Inc., a corporation created to be the operational arm of the national LP for the purpose of conducting financial affairs and complying with campaign finance regulations. 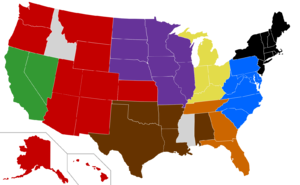 The members of the Libertarian National Committee generally serve terms of approximately two years, from one national convention to the next, although there are sometimes changes in individual positions within a term due to resignations and consequent reassignments.

Much of the business of the national Libertarian Party is managed and executed by paid personnel who are not themselves members of the LNC. Functions performed by such personnel may include production of the LP News and other publications, maintaining the member/donor database, answering inquiries from prospective members and the media, managing ballot access projects, operating the party's web site, and fundraising. Although most of this work goes beyond support of the LNC itself as a committee, because all of these functions are ultimately under the control of the LNC these people are commonly referred to as LNC Staff.

The table below shows the total number of individual donors to the LNC during the previous 12 months.