The 1996 Libertarian National Convention took place July 3 through July 7 in Washington, DC. at the Hyatt Regency Hotel. The theme for this convention was "Declare Your Independence." The national party announcement declared, "More than 1,000 Libertarian activists from across the nation will gather in Washington, DC, during the week of July 4, 1996, to participate in a history-making national convention. The activists will nominate presidential and vice-presidential candidates for the 1996 elections. Convention attendees also will gather on the front steps of the U.S. Capitol where more than 218 Libertarian Party candidates for the U.S. House will unveil the 'Libertarian Contract with America.' Make plans now for the biggest and best Libertarian Party national convention ever. The Libertarians will confront the Republican and Democratic parties where they live -- and Washington, DC, will never be the same!" 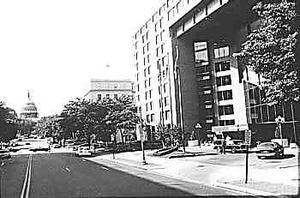 Jo Jorgensen was chosen as the vice-presidential candidate.