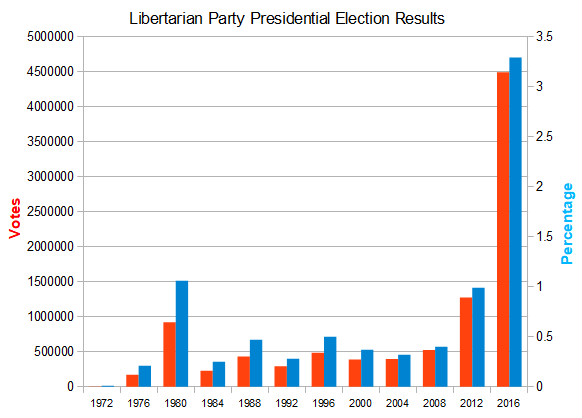 Since 1972, there have been 10 different Libertarian Presidential nominees, in 12 elections. (Two candidates were nominated twice.) In 1972, the LP's first Presidential candidate John Hospers received the first and only electoral vote in the party's history when one "faithless elector" voted for him. The first candidate to break the one percent mark was Ed Clark in 1980. This remained the best showing both as a percentage and in raw number of votes until 2012, when Gary Johnson became the first candidate to receive more than one million votes (but just shy of one percent). Running again in 2016, Gary Johnson then beat the previous record by both measures by a wide margin, receiving more than three percent and more than four million votes.

By 1976, the party had started to organize and was able to mount a more solid campaign for president. The nominee was Roger MacBride, the same faithless elector who voted for John Hospers in the last election. The Vice-Presidential nominee was David Bergland. The pair managed to gain ballot access in 32 states and was able to gain more than 100,000 votes, a milestone for the relatively new political party.

The 1980 Presidential Election was another major milestone for the Libertarian Party. The Party nominated Ed Clark for President and David Koch for Vice-President. The campaign was largely self-financed and was able to run several national television advertisements. The ticket gained ballot access in all 50 states. In Alaska, the ticket gained 11.66% of the vote.

At the 1984 National Convention, many Libertarians walked out, leading many to suspect the end of the party was near. As a result of the walkout, David Bergland was nominated for President and Jim Lewis was nominated for Vice-President. The ticket had ballot access in 36 states.

In a nomination contest that featured candidates with very different backgrounds and styles, and was also seen by some as a choice between presenting a "right" or "left" image, former Congressman Ron Paul was selected over American Indian activist Russell Means as the Presidential nominee for 1988. Andre Marrou, one of the few Libertarians who had been elected to a state legislature, was the Vice-Presidential nominee. The campaign raised over $2,000,000 and was on the ballot in 46 states.

Harry Browne was the Presidential nominee in 1996 and his running mate was Jo Jorgensen. Partly due to personal financial support by the candidate, the campaign was able to get on the ballot in all 50 states.

Harry Browne was re-nominated as the Presidential nominee in 2000 but chose Art Olivier as his running mate. The campaign had some controversy surrounding it after the National Director was found to have worked on the campaign in 1996 before Harry Browne's candidacy had been decided. The campaign nearly got on the ballot in all 50 states again but a split with the Arizona Libertarian Party caused Harry Browne to be replaced on the ticket with another Libertarian.

At the 2004 Convention, the Presidential Nomination Election was very close. The race was between Michael Badnarik, Gary Nolan, and Aaron Russo. All three candidates were within 2% of each other for the first two ballots. However, Michael Badnarik made a surprising comeback and won the nomination. In a separate nomination, Richard Campagna was chosen as the vice-presidential nominee. During the election cycle, Badnarik raised over $1,000,000 and ran national television ads on CNN and Fox news. The ticket gained ballot access in 48 states but didn't gain access in New Hampshire or Oklahoma.

Bob Barr was nominated as the Presidential nominee in 2008 with Wayne Allyn Root nominated as the Vice-Presidential Candidate. The Barr campaign was expected to do very well but due to several factors such as Sarah Palin's nomination as McCain's VP, Ron Paul's dropping of his endorsement of Barr, and the campaign's lack of advertising. The campaign still raised nearly $1.4 million dollars but didn't get as many votes as many Libertarian Leaders felt it could have. The ticket was on the ballot in 44 states. Barr returned thereafter to the Republican Party.

Gary Johnson, former governor of New Mexico, was nominated in 2012, with Jim Gray as his running mate. The ticket was on the ballot in all but two states, and became the first to receive more than one million votes, and the first to break the record for that measure set 32 years earlier by Ed Clark.

Gary Johnson was nominated again in 2016, this time with William Weld as his running mate. This was seen by some as the LP's most "credible" national ticket ever, with both candidates being former governors, but others saw the inclusion of Weld as a dilution of the party's brand. For the first time since 2000, the LP had a presidential ticket on the ballot in all 50 states. In an election that was very close between front-runners Donald Trump and Hillary Clinton, but with many voters unhappy about that choice, the LP's team achieved a record-breaking three percent of the national vote, receiving the votes of almost 4.5 million people. William Weld was a controversial candidate due to a past broken promise with the Libertarian Party of New York and certain policy positions, particularly on gun control. During the campaign, he stated that "he was here to vouch for Hillary Clinton" causing some Party members to view that as an endorsement of an opponent. In 2019, Weld broke his promise that he would never switch to another party and re-registered with the Republican Party.

North Dakota held an open primary on June 14th with candidates of all parties on one ballot.

California's primary was open to Independents as well as registered Libertarians. Held on March 7th.

Minnesota is a caucus state. The Libertarian Party of Minnesota held a caucus on March 1st at the same time as those of the two establishment parties.

The Libertarian Party of Oregon was not eligible to participate in state-run primaries and so held a party-run primary by mail-in ballot to be completed on May 27th, the day of the establishment party primaries.

New Hampshire self-funded a ranked-choice primary conducted by mail as well as in-person voting at the state convention on Jan. 11th.

The Libertarian Party of Iowa conducted their caucuses on February 8, offering in-person caucus locations and an online virtual caucus. Only registered Libertarians were eligible to participate.

The Libertarian Party of Minnesota used ranked-choice voting to tabulate the results of their caucus on Feb. 25th. After 7 rounds, Jacob Hornberger was declared the winner.

Online voting in this party-run primary took place from April 25th through the 28th.

New York held it's primaries on April 28th but no contest was held for the Libertarian Party as only Jacob Hornberger qualified for the ballot and so won by default.

Results by state and candidate

Guam (Results don't count because Guam has no electoral votes)