1996 Campaign for Vice-President of the United States

Jo Jorgensen was the running mate of Harry Browne during the 1996 presidential race. 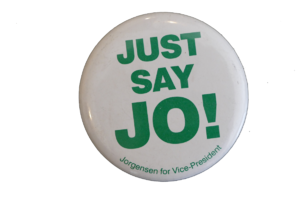 2020 Campaign for President of the United States

On 13 August 2019, Jorgensen announced her candidacy for President, seeking the Libertarian nomination. On 23 May 2020, Jorgensen was nominated on the 3rd ballot during the May 22-24 portion of the Libertarian National Convention.[1] On 24 May 2020, Spike Cohen was selected as Jorgensen's running mate.[2]