Avens O'Brien is a writer, speaker, entrepreneur, and activist based in Los Angeles, California. She sits on the board of Feminists for Liberty. She is a frequent speaker and photographer at liberty-oriented conferences and a writer on libertarian subject matter, known for her contributions at The Libertarian Republic, an online news publisher. She publishes her convention photography and much of her commentary on Facebook.

She gave an endorsement in The Libertarian Republic for 2020 candidate Vermin Supreme and gave a nominating speech for him at the National Convention 2020.

Avens O'Brien is often referred to as a "Second Generation Libertarian" due to her parents' involvement in party activism in the 1970s and 1980s. Her mother is Domi O'Brien, former Secretary of the Libertarian Party of New Hampshire and candidate for Governor of New Hampshire in 1986. Her father is Arne Erickson, former activist and candidate for several offices in New Hampshire. Her mother's father Jack O'Brien ran for Congress as a Libertarian in New Hampshire in 1974. Both of her parents were active in petition drives and ballot access initiatives as well as campaigning locally for candidates, and hosting speakers such as Murray Rothbard and Irwin Schiff at their home. Her mother was very active with the New Hampshire Civil Liberties Union, and the Alliance for the Separation of School & State. Her parents were homeschoolers and advocates for alternative education.

O'Brien grew up primarily in New Hampshire, and began college at 14. Her early activism was primarily centered around opposing the federal government's actions following the events of September 11th, 2001. She attended numerous anti-war protests and a Badnarik campaign event in NYC in 2004. She ran for and was elected Vice Chair of the Libertarian Party of New Hampshire in 2006, at age 19, and stepped down in 2008. 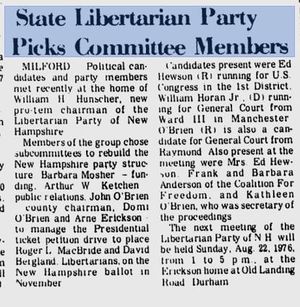 She moved to Los Angeles in 2010. She began dating activist Judd Weiss in 2012. She began photographing liberty events in 2013, and speaking at liberty conferences in 2016.

She is an investor in and contractor (she works in finance & accounting) for a YouTube Multi-Channel Network specializing in emerging markets, since 2014.

She has worked in the cannabis industry since 2017. She currently provides support to growers in cannabis and mycology.

O'Brien has stated publicly that she does not endorse candidates for Chair, Vice-Chair, Secretary or Treasurer as a rule, citing her interest in unity and decreased factionalization. She has endorsed one candidate for internal party office (LNC At-Large) and two presidential candidates seeking the nomination.

O'Brien does not endorse any broad-based caucus within the Libertarian Party, preferring single-issue caucuses.