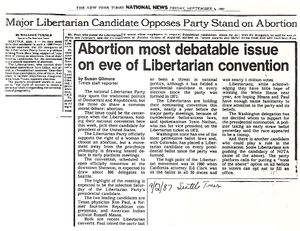 The Pro-Choice Libertarians group was founded in 1987 in reaction to anti-abortionist former Republican Party congressional representative Ron Paul's announcement he was running for the Libertarian Party nomination for president in the 1988 race. Pro-choice libertarian party members recruited American Indian activist Russell Means to run against him.[1] Abortion was the primary issue covered by mainstream media at the beginning of the convention.[2][3]

Since that time members have organized mostly before conventions when they believed the Libertarian Party's plank stating the government should keep out of the abortion issue might be removed. The group created a website in 2002 and a Facebook presence in 2016.[4]

The group details various libertarians' defenses of the right to reproductive rights and abortion, grouped under four basic libertarian principles[4]: individual liberty, self-ownership, self-determination and limited government. The group notes that while many libertarians describe themselves as “pro-life” on the abortion issue, most do not want government regulating or prohibiting abortion. Those who want laws against abortion are considered "abortion prohibitionists."[5] 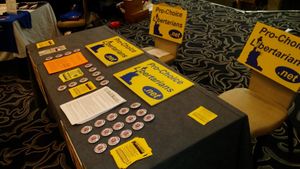 Two mainstream research organizations have found that more than half and as many as three-quarters of libertarians support a pro-choice position.[6][7]

The Libertarian Party's platform historically made a detailed case for women's reproductive rights. Since 2008 an "abortion" plank has read: "Recognizing that abortion is a sensitive issue and that people can hold good-faith views on all sides, we believe that government should be kept out of the matter, leaving the question to each person for their conscientious consideration.”[8][9]

The Libertarian case for reproductive rights and abortion

While individual libertarians may give different weight to principles of individual liberty, self-ownership, self-determination and limited government in formulating their views on reproductive rights and abortion, most generally agree[4]: 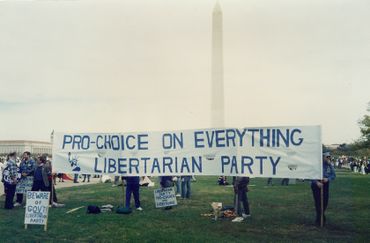