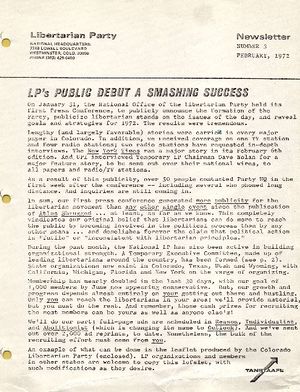 On January 31, the National Office of the Libertarian Party held its first Press Conference, to publicly announce the formation of the Party, publicize libertarian stands on the issues of the day, and reveal goals and strategies for 1972.[1] The results were tremendous.

Lengthy (and largely favorable) stories were carried in every major paper in Colorado. In addition, we received coverage on one TV station and four radio stations; two radio stations have requested in-depth interviews. The New York Times ran a major story in its February 6th edition. And UPI interviewed Temporary LP Chairman Dave Nolan for a major feature story, to be sent out over their national wires, to all papers and radio/TV stations.

As a result of this publicity, over 50 people contacted Party HQ in the first week after the conference -- including several who called long distance. And inquires are still coming in.

In sum, our first press conference generated more publicity for the libertarian movement than any other single event since the publication of Atlas Shrugged... at least, as far we know. This completely vindicates our original belief that libertarians can do more to reach the public by becoming involved in the political process than by any other means... and demolishes forever the claim that political action is "futile" or "inconsistent with libertarian principles."

During the past month, the National LP has also been active in building organizational strength. A Temporary Executive Committee, made up leading libertarians around the country, has been formed (see p. 2). State organizations now exist in Colorado, Texas, Utah, and Wyoming, with California, Michigan, Florida, and New York on the verge of organizing.

Membership has nearly doubled in the last 30 days, with our goal of 1,000 members by June now appearing conservative. But, our growth and progress depends almost entirely on your getting out there and hustling. Only you can reach the libertarians in your area; we'll provide material, but you must do the rest. And remember, those cash prizes for recruiting the most members can be yours as well as anyone else's.

We'll do our part; full-page ads are scheduled in Reason, Individualist, and Abolitionist (which is changing its name to Outlook). And we've sent out over 2,000 ad reprints, to date. Nonetheless, the bulk of the recruiting effort must come from you.

An example of what can be done is the leaflet produced by the Colorado Libertarian Party (enclosed). LP organizations and members in other states are welcome to copy this leaflet, with such modifications as they desire.

Unlike some organizations, the Libertarian Party is not going to be one of those outfits where a small clique of self-appointed leaders runs the show, and everyone else does all the work. At the Convention in June, National Officers and an Executive Committee will be elected: for the interim, however, a Temporary Executive Committee has been appointed, to hasten the process of decentralization. To assure geographic balance, the country has been divided into eight regions, and one or more Party members from each region have been appointed the Temporary Executive Committee. These individuals were chosen on the bases of past achievements and degree of enthusiasm shown for the LP concept, plus a determined effort to make that all age-groups and philosophical schools are represented according to their strength in the Party. 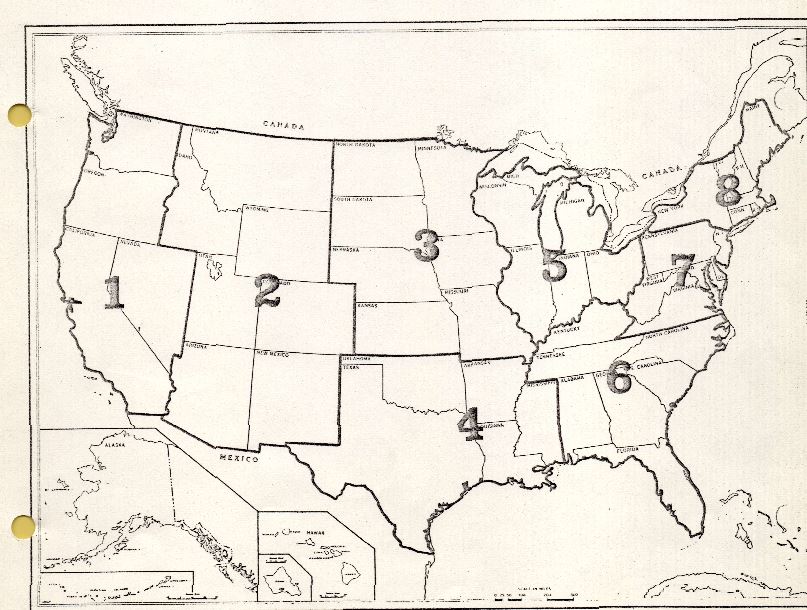 GO BACK TO INDEX OF LP NEWS

This issue contains a political article criticizing Richard Nixon over his visit to Peking among other things. It is quite harsh calling him deceitful, tricky, the great deceiver, and a rascal. The article goes on to insist that Libertarians shouldn't find hope in Nixon calling the idea "retarded". In addition other prominent politicians involved in the GOP primary such as Pete McCloskey and John Ashbrook are criticized, Ashbrook to a much lesser extent. The article concludes with a prediction for the primary and sets out the fololowing recommendations for the Libertarian Party to take in order to increase the chance of libertarian ideals being heard:

Here the LP News article points out a new and revised way to score federal representatives created by A Review of the news. It uses a rubric that determines how libertarian someone is. It ensures for a representative to get a 100 that representative must vote for liberty 100% of the time.

A Case for the Libertarian Party

This part of bits and pieces celebrates an article written by chair of the LP chair, David Nolan getting published in the July/August issue of the The Individualist

Platform Plank Already Has Much Support

This portion of the issue celebrates the potential to legalese the ownership of gold, it urges members to contact their congressmen for the purposes of gathering their support for the legislation that would legalese gold.

This is serving as an announcement of an offer to anyone that can submit clippings from their newspaper containing articles about the Libertarian Party. One dollar in cash or two dollars in party materials for each clipping.

Members that joined the LP prior to January 1972 should have their cards enclosed in this LP News issue, those who joined after will find it in their membership kits.

Members are encouraged to continue sending suggestions about the platform. Members should also get a subscription to LP News , this can be bundled with membership dues.

Here lies the denunciation of a group out in California that's trying to get Libertarians to join a "League of Non -Voters."

Texas LP leaders Keith Jones and Mike Holmes interviewed Temporary LP Chairman Dave Nolan, via telephone, on the January 20th broadcast of their weekly radio program in Houston. For 15 minutes, the three discussed the Party's Temporary Platform, the underlying philosophy, and the Party's plans for action in 1972. This also was the way to contact the program if another radio station wished to air the interview.

The dates of the first National Convention were finalized, the plans called for it to be held in Denver, June 8th through 11th. Dale Nelson was assigned the post of Convention Arrangements Chairman. More Spefic plans including accomadations were planned to be outlined in the next newsletter.