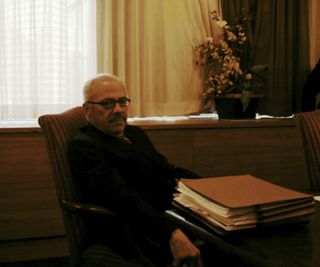 Robert L Barr, Jr. (born November 5, 1948) is an attorney and a former member of the United States House of Representatives from Georgia. Barr represented the 7th District of Georgia, from 1995 to 2003. In 2008, Bob Barr was the Libertarian Party nominee for President of the United States, his running mate was Wayne Allyn Root.

Prior to his work in Congress, President Ronald Reagan appointed him to serve as the United States Attorney for the Northern District of Georgia. He served from 1986 until 1990. Despite being an ardent supporter of the War on Drugs, Barr opposed the RAVE Act. He sat on the Board of Directors of the National Rifle Association from 2001 - 2007.[1] Barr achieved significant notoriety as one of the leaders of the effort to impeach President Bill Clinton.

Barr was born in Iowa City, Iowa. His parents served in the military, and Barr spent many years with them in Iran. He attended the University of Southern California and later earned a law degree from George Washington University. From 1971 to 1978, he served as a member of the Central Intelligence Agency. He retired to work as a private lawyer, and in 1986, was appointed by President Reagan to be U.S. Attorney for the Northern District of Georgia, in which post he served until 1990. From 1990-1991 he was President of the Southeastern Legal Foundation.

Barr ran for the US Senate in 1992, losing the Republican primary to Paul Coverdell. In 1994, he was elected to the U.S. House, defeating six-term Democrat Buddy Darden in what is still considered an upset.

Barr was one of the most conservative members of the House, but occasionally displayed a libertarian streak. He only voted for the Patriot Act after his amendments adding "sunset clauses" were added to the final bill. However, he is best known for his role as one of the House managers during the Clinton impeachment trial. During debate on the impeachment articles, he argued that Clinton's misleading testimony in the Paula Jones case endangered the Constitution, and thus demanded Clinton's removal from office.

Barr was an ardent opponent of same-sex marriage. He authored and sponsored the Defense of Marriage Act, a law enacted in 1996 that states only marriages that are between a man and a woman can be federally recognized, and individual states may choose not to recognize a same-sex couple even if the "marriage" is recognized in another state.[2] However, he does not support the Federal Marriage Amendment, citing states' rights reasons.[3]

In Congress, he also controversially proposed that the Pentagon ban the practice of Wicca in the military.[3] [4]

Prior to the 2002 elections, the Democratic-controlled Georgia legislature split Barr's 7th District during the redistricting process, even though Georgia had gained two seats as a result of the latest census. Barr's home in Smyrna was drawn into the heavily Democratic 4th District, represented by Cynthia McKinney. Most of his former territory was reconfigured into the 11th District, and drawn to be more Democratic. He chose to challenge fellow Republican Congressman John Linder in a district that, while retaining Barr's district number (the 7th), contained more of Linder's former territory. Barr was heavily defeated in the primary. His old district was won by Phil Gingrey, a Republican who is almost as conservative as Barr.

Since leaving Congress in 2003, Barr has become a vocal opponent of the Patriot Act and has stated that he regrets voting for it, and opposes any attempt by Congress to renew many of its provisions in 2005. In 2005, he helped found an organization called Patriots to Restore Checks and Balances, with the purpose of eliminating aspects of the Patriot Act that could potentially affect law-abiding citizens rather than terrorists, and to "restore traditional checks and balances on government power so the country can effectively fight terror without sacrificing the rights of innocent Americans, rights that are guaranteed by the Constitution." [4]

More recently Barr has become a prominent member of the American Civil Liberties Union, sometimes doing paid consulting on privacy issues [5]. In the 2004 Presidential election, Barr abandoned the Republican Party and publicly endorsed the presidential ticket of the Libertarian Party.

Barr is a commentator on political and social issues and is chairman of the American Conservative Union Foundation's '21st Century Center for Privacy and Freedom.'[citation requested]

Barr hosts a conservative talk radio show on Radio America called Bob Barr's Laws of the Universe, on which he has had guests including Trent Lott, Tom DeLay, Oliver North, and Robert Bork. His first "law of the Universe" is that "the world is full of idiots, and he features on Idiot of the Week on his show, along with a top ten of Idiots of the Year selected from the Idiots of the Week. His Idiot for the Year for 2005 was the city of Newark, New Jersey, for using a federal anti-terrorism grant to purchase ten garbage trucks, explaining that the trucks could be used as barriers to protect possible targets in a time of crisis.[citation requested]

In January 2006, to emphasize the bipartisan nature of the event, Barr planned on introducing Al Gore at a speech co-sponsored by the Liberty Coalition and the American Constitution Society for Law and Policy to address what they called the "NSA Spying Scandal", although technical problems interfered with Barr's live satellite feed.[citation requested]

On December 12, 2006, he became a regional representative on the Libertarian National Committee, representing the Party's Southeast Region.[5] Since joining the Libertarian Party, Barr has reversed his previous stance favoring the War on Drugs and is now a lobbyist for the Marijuana Policy Project. He is one of the four principle people from the conservative movement behind the American Freedom Agenda[6], which is described as "a coalition established to restore checks and balances and civil liberties protections under assault by the executive branch."[7] The American Freedom Agenda has established a 10-point Freedom Pledge for presidential candidates which confirms their commitment to civil liberties. According to Barr,

I, over the years, have taken a very strong stand on drug issues, but in light of the tremendous growth of government power since 9/11, it has forced me and other conservatives to go back and take a renewed look at how big and powerful we want the government to be in peoples' lives.[6]