Andre Verne Marrou (b. December 4, 1938) is a former elected Libertarian in the Alaska state legislature and the Libertarian Party's 1992 presidential nominee. He was Ron Paul's running mate in the 1988 presidential race.

After an extended absence from party activities, he publicly endorsed Gary Johnson in 2012 at the LPTexas state convention. [1] 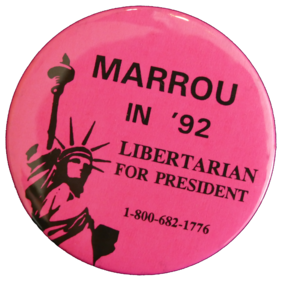