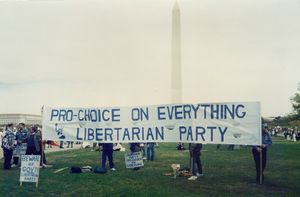 Pro-Choice on Everything is a libertarian slogan used by many activists and used by the National Libertarian Page on its website in 1999. It is often used in the context of the abortion debate but it is meant to capitalize on the whole gamut of bodily autonomy.

The original "I'm Pro-Choice on Everything" bumper sticker was produced in Oregon and first made available nationally at the 1989 convention in Philadephia:

These bumper stickers have been used with the phrase and have been available via the LP.org site link to LPStuff.com in the past.

The abortion debate is hotly contested in the Party with the Platform taking the stand of allowing for different stands of conscience but that the state should not be involved.[1] Pro-Life Libertarians was a caucus founded by the late Doris Gordon which opposed this stance, and Pro-Choice Libertarians is a current caucus advocating for retaining or strengthening the abortion plank.

A choose-the-2018-convention theme via voting with dollars fundraiser included this slogan as part of its choices causing some to mistakenly claim that its inclusion was a direct shot against pro-lifers. However, this has been a long-standing slogan used, and is not targeted against anyone.[2] 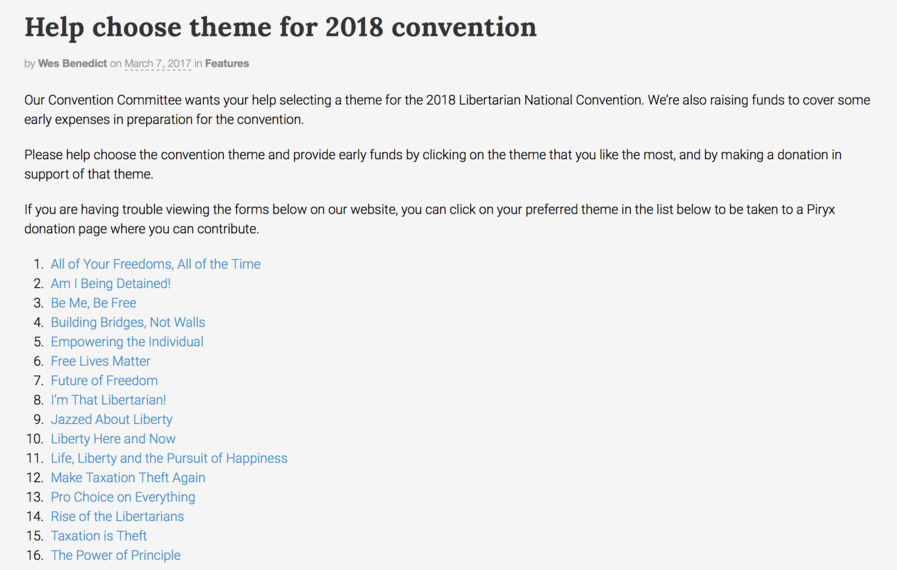 The theme that eventually won was That Libertarian in honor of Dr. Marc Feldman. Pro-choice on Everything raised $1,600.00.