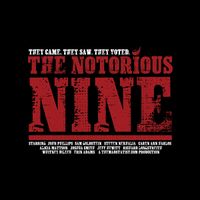 In the time leading up the National Convention 2020, there was a split in the LNC concerning the authority of the LNC to unilaterally set online-only conventions and to declare all delegates (both online and in-person) as credentialled in a hybrid convention due to the COVID-19 pandemic. This split coalesced around an unlikely group of allies that the then-chair Nicholas Sarwark called the "Notorious Nine" (though in reality, it was ten people) when critiquing opposition to his points of view on the LNC. While the term was not meant to be flattering, the ten persons took it as a badge of honor as all sides involved felt they were doing the right thing. Kieran ó Sé of The Mad Statist designed a commemorative t-shirt. The Notorious Nine were vindicated by the second sitting of the National Convention 2020 wherein the LNC overreach in usurping the delegates' right to decide whether or not a hybrid convention would be permitted was soundly rebuked. The delegates did approve the hybrid convention but wanted to be clear that it was their decision to make and to make sure no future LNC made the same mistake. Despite a coordinated campaign to unseat the Notorious Nine, the majority of them were re-elected with the general feeling being that they acted with integrity, even by those who disagreed at the time. Only Sam Goldstein did not retain a seat being too busy with his convention committee related duties - Alicia Mattson earned a seat on the Judicial Committee while the rest stayed on the LNC. Under the new leadership of 2020-2022 chair Joseph Bishop-Henchman that rift was quickly healed.