Richard Clarke Randall (born January 17, 1959) was the Libertarian Party of Colorado nominee for United States Senate in the 2004 elections. He placed fourth in the race behind the American Constitution Party (ACP) candidate, Douglas "Dayhorse" Campbell. Randall again sought public office as the Libertarian Party of Colorado nominee for Lieutenant Governor of Colorado in the 2006 elections. Running with Dawn Winkler-Kinateder (the Gubernatorial candidate), the team placed third in the race.

In August, 1984, Randall re-located to Norcross, Georgia (a suburb of Atlanta) where he accepted a position as an Instrument Technician for General Electric in September.

Richard Randall married Lee Ormond Wade on June 9, 1990 in Toccoa, Georgia - and divorced during July, 1994. Shortly after his divorce, Randall met Monica Kathryn Hillier (from Los Angeles, California). During the summer of 1995, Randall along with Hillier, relocated to Aurora, Colorado. Randall and Hillier were married on November 1, 1997 in Golden, Colorado. However, the marriage was annulled on October 26, 2000. There were no children from either marriage.

During his childhood, Randall became an accomplished equestrian riding English and Western. His Aunt, Dolores Brady, owned a nearby stable where Randall developed his riding skills. Randall showed Tennessee Walking horses and won many ribbons during his teen years. While in high School, Randall took interest in playing electric guitar, which he still enjoys today. Heavily influenced by the style of Eddie Van Halen, Randall played guitar in several small rock groups during his late teens, twenties and early thirties.

Randall is a movie aficionado, and while he rarely has the opportunity to SCUBA dive, Randall has been a certified PADI Open Water Diver since 1992. Randall also enjoys working with computers, preferring to use a MacBook or Mandriva Linux Operating System on desktop computers.

After becoming and IRCA certified Quality Management Systems Auditor, Randall left General Electric in May, 1993, and accepted the position of Southeast Regional Director for NQA-USA. In May, 1995 Randall wrote a book titled, Randall's Practical Guide to ISO 9000 (ISBN 0-201-63379-5), published by Addison-Wesley Publishing Co., on the subject of implementing an ISO 9000 compliant quality management system.

Frustrated with the choices offered by the two major political parties, Randall researched and first identified himself as a Libertarian in 1994. After moving to Colorado, he befriended Travis Nicks, who would later serve as the State Chair of the Libertarian Party of Colorado (LPCO). Both Randall and Nicks began their political activism serving as volunteers for Ralph Shnelvar, the Libertarian candidate for Colorado Governor in 2002. Shnelvar and his running mate, Desiree Hackett Hickson, earned 20,547 votes (1.43% of the total votes cast). 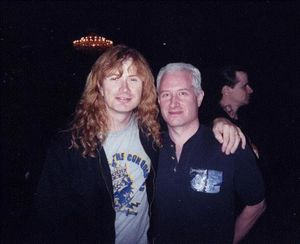 Randall with Dave Mustaine - of Megadeth - Election Night 2004 in Denver

The following year, Nicks first ran for public office in a recall election for Arapahoe County Clerk. Randall volunteered to serve as Nick's Logistics Coordinator. Shnelvar also volunteered to work on the campaign as Media Director. While Nicks did not win the election, the experience inspired both Randall and Nicks to become more involved with the Libertarian Party.

During May, 2004, Randall was elected to serve as the Legislative Director for the Libertarian Party of Colorado. Impressed with his professionalism, the vacancy committee for the LPCO convinced Randall to run for the United States Senate in the 2004 elections. Waging a modest campaign, Randall placed fourth in the race behind American Constitution Party (ACP) candidate, Douglas "Dayhorse" Campbell. On election night, Randall and his supporters awaited the election results with political activist and heavy metal rocker, Dave Mustaine of Megadeth, at the Fillmore in Denver, Colorado. 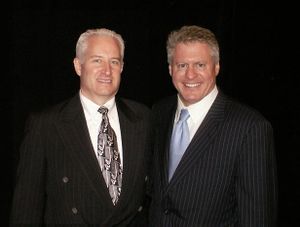 Randall personally recruited Dawn Winkler-Kinateder to seek the Libertarian Party of Colorado nomination for Governor in 2006. Upon her nomination, she recruited Randall to run as her Lieutenant Governor of Colorado. After waging a much more aggressive campaign than Randall had in 2004, the team placed third in the race.

During the 2008 National Libertarian Party Convention in Denver, Randall was urged by the Colorado delegation to seek an "At Large" position on the Libertarian National Committee (LNC). Randall agreed and ran for that position. He received endorsement speeches from Michael Jingozian (who had just been elected to serve as the Vice-Chair of the LNC) and Joe Johnson (former "Trustee" for the city of Frederick, Colorado). However, Randall was defeated in that race.

Randall continues to be active in politics.

Randall's positions are all based upon the Libertarian Party of Colorado "Values" statement (repealed at the Colorado State Party Convention in 2016), which states in part, "In a free society, government is established of, by, and for the people. The purpose of government is to protect our human and civil rights, establish a judicial system, provide for the common defense, and serve as steward of our public resources."

Like many libertarians, Randall believes that the federal government has exceeded its Constitutional bounds and should be scaled back in favor of a libertarian society.

The above information was primarily obtained directly from Richard C. Randall. Election results were obtained from the Colorado Secretary of State.