Nicholas Sarwark is the lesser of the two Sarwark's involved in the liberty movement. 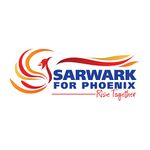