Document:Editorial 1973 A History of the Libertarian Party 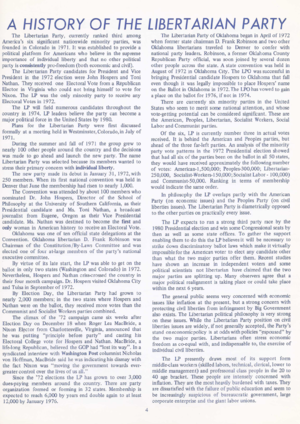 A History of the Libertarian Party

The Libertarian Party, currently ranked third among America's six significant nationwide minority parties, was founded in Colorado in 1971. It was established to provide a political platform for Americans who believe in the supreme importance of individual liberty and that no other political party is consistently pro-freedom (both economic and civil).

The Libertarian Party candidates for President and Vice-President in the 1972 election were John Hospers and Tonie Nathan. They received one Electoral Vote from a Republican Elector in Virginia who could not bring himself to vote for Nixon. The LP was the only minority party to receive any Electoral Votes in 1972.

The LP will field numerous candidates throughout the country in 1974. LP leaders believe the party can become a major political force in the United States by 1980.

Plans for the Libertarian Party were first discussed formally at a meeting held in Westminster, Colorado, in July of 1971.

During the summer and fall of 1971 the group grew to nearly 100 other people around the country and the decisions was made to go ahead and launch the new party. The name Libertarian Party was selected because its members wanted to stress their primary concern with individual liberty.

The new party made its debut in January 31, 1972, with 250 members. When its first national convention was held in Denver that June the membership had risen to nearly 1,000.

The Convention was attended by about 100 members who nominated Dr. John Hospers, Director of the School of Philosophy at the University of Southern California, as their Presidential candidate and Ms. Tonie Nathan, a broadcast journalist from Eugene, Oregon as their Vice Presidential candidate. Ms. Nathan was destined to become the first and only woman in American history to receive an Electoral Vote. Oklahoma was one of ten official state delegations at the Convention. Oklahoma libertarian D. Frank Robinson was Chairman of the Constitution/By-Laws Committee and was elected one of four at-large members of the party's national executive committee.

By virtue of its late start, the LP was able to get on the ballot in only two states (Washington and Colorado) in 1972. Nevertheless, Hospers and Nathan criss-crossed the country in their four month campaign. Dr. Hospers visited Oklahoma City and Tulsa in September of 1972.

By Election Day, the Libertarian Party had grown to nearly 2,000 members; in the two states where Hospers and Nathan were on the ballot, they received more votes than the Communist and Socialist Workers parties combined.

The climax of the '72 campaign came six weeks after Election Day on December 18 when Roger Lea MacBride, a Nixon Elector from Charlottesville, Virginia, announced that he was putting "principle before party" and casting his Electoral College vote for Hospers and Nathan. MacBride, a life-long Republican, believed the GOP had "lost its way". In a syndicated interview with Washington Post columnist Nicholas von Hoffman, MacBride said he was indicating his dismay with the fact Nixon was "moving the government towards ever­ greater control over the lives of us all."

Since the '72 elections the LP has grown to over 3,000 dues-paying members around the country. There are party organization formed or forming in 32 states. Membership is expected to reach 6,000 by years end double again to at least 12,000 by January 1976.

The Libertarian Party of Oklahoma began in April of 1972 when former state chairman D. Frank Robinson and two other Oklahoma libertarians traveled to Denver to confer with national party leaders. Robinson, a former Oklahoma County Republican Party official, was soon joined by several dozen other people across the state. A state convention was held in August of 1972 in Oklahoma City. The LPO was successful in bringing Presidential candidate Hospers to Oklahoma that fall even though it was legally impossible to place Hospers' name on the Ballot in Oklahoma in 1972. The LPO has vowed to gain a place on the ballot for 1976, if not in 1974.

There are currently six minority parties in the United States who seem to merit some national attention, and whose vote-getting potential can be considered significant. These are the American, Peoples, Libertarian, Socialist Workers, Social Labor and Communist parties. Of the six, LP is currently number three in actual votes received. It is behind the American and Peoples parties, but ahead of the three far-left parties. An analysis of the minority party vote patterns in the 1972 Presidential election showed that had all six of the parties been on the ballot in all 50 states, they would have received approximately the following number of votes: American-1,500,000; Peoples-300,000; Libertarian- 250,000, Socialist-Workers-150,000;Socialist Labor - 100,000) and Communist-50,000. Ranking in terms of membership would indicate the same order.

In philosophy the LP overlaps partly with the American Party (on economic issues) and the Peoples Party (on civil liberties issues). The Libertarian Party is diametrically opposed to the other parties on practically every issue.

The LP expects to run a strong third party race by the 1980 Presidential election and win some Congressional seats by then as well as some state offices. To gather the support enabling them to do this the LP believes it will be necessary to strike down discriminatory ballot laws which make it virtually impossible for the American voter to elect any candidate other than what the two major parties offer them. Recent studies have shown an increase in independent voters and some political scientists not libertarian have claimed that the two major parties are splitting up. Many observers agree that a major political realignment is taking place or could take place within the next 6 years.

The general public seems very concerned with economic issues like inflation at the present, but a strong concern with protecting civil liberties from infringment by Big Government also exists. The Libertarian political philosophy is very strong on these issues. While the Libertarian Party position on civil liberties issues are widely, if not generally accepted, the Party's stand on economic policy is at odds with policies "espoused" by the two major parties. Libertarians often stress economic freedom as co-equal with, and indispensable to, the exercise of individual civil liberties.

The LP presently draws most of its support form middle-class workers (skilled labors, technical, clerical, lower to middle management) and professonal class people in the 20 to 40 age bracket. These people are intensely concerned with inflation. They are the most heavily burdened with taxes. They are dissatisfied with the failure of public education and seem to be increasingly suspicious of bureaucratic government, large corporate enterprise and the giant labor unions.