David Koch (May 3, 1940 – August 23, 2019), was a businessman, Libertarian vice-presidential candidate, and member of the Koch family. Koch funded Ed Clark's 1980 presidential campaign and following his exit from the Libertarian Party in 1984 would finance political advocacy groups and further support libertarian and conservative causes.

Koch was born on May 3, 1940 in Wichita, Kansas along with his twin brother Bill and was the younger brother of Frederick and Charles. He graduated from the Deerfield Academy prep school in 1959 and later earned both bachelor's and master's degrees in chemical engineering at Massachusetts Institute of Technology.

Koch was diagnosed with prostate cancer in 1992 and despite treatment against it would continue suffering from it and die from it on August 23, 2019. He is survived by his wife, his three children (David Jr., John, and Mary), and his brothers.

On September 8, 1979 Koch was nominated as the Libertarian Party's 1980 vice-presidential candidate at the national convention.[1] Koch had previously given Ed Clark a donation of $1,000, the maximum amount set by federal standards, and pledged $500,000 of his personal funds to the Libertarian campaign now that he was a candidate. The funding given to the campaign allowed it to become both the first third party campaign to gain ballot access in all 50 states as well as the first Libertarian campaign to do so as well. The ticket received over 900,000 votes nationwide for 1% of the popular vote and Koch surpassed his pledge and gave over $2 million to the campaign.[2]

Before leaving the Libertarian Party Koch endorsed Earl Ravenal for president who would later be narrowly defeated by David Bergland by 27 votes at the 1983 national convention.[3] Koch left the party after it gave support to the elimination of all taxes and joined the Republican Party.[4] Although, Koch may have realized that position at that time, the elimination of all taxes has been the position of the Party since its founding.

In 2018, the national LP published a tribute article David Koch, we owe you. Signed, Liberty. 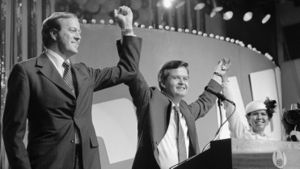 Though Koch left the Libertarian Party to support Republican candidates, he always identified as a libertarian. During a 2014 interview with Barbara Walters the following discussion ensued:[5]