The Classical Statue Logo became the official logo of the Libertarian Party during the 1980 presidential election season and remains in widespread use. There are five main known variants, each appearing throughout party history, and most of them continue to be seen in current use.

The color of the statue is normally dark blue against a white background. 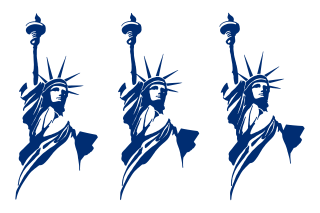 While most people don't notice, there have been at least five major variations in the Classical Statue Logo. With the possible exception of the Clark variant, each originated after the initial introduction.

It has been hypothesized by Joe Dehn and others that many of the differences are the result of degradation caused by the duplication technologies used during the 1980s. This may also explain the lack of commonly seen new variants appearing since the mid 1990s.

The naming convention used here is to, when practical, use presidential candidates to provide approximate time periods of origin and to provide easy to remember names. It is not to suggest that the presidential campaigns were in any way involved with making alterations to the party logo.

The classical Statue Logo was developed by Dick Axtell of Keyes Art Service in the 1970s and was donated to the national party (which formally adopted it on 4 May 1980) by company president Audrey Keyes. It was originally used by the Libertarian Party of Arizona. That version is believed to be the one indicated here.

Earliest known sighting: Before May 1980

This variant was in the wild in 1980 and is the one seen on the cover of Ed Clark's campaign book, A New Beginning.

Here the swirl to the far right of Liberty's robe is closed, the white lines descending from her right shoulder are narrower, and a tiara spike is in a different position.

It is possible that this is an alternate version of the original of approximately the same time of origin.

Earliest known sighting: Before May 1980

This variant was in the wild by 1984 and descends from the one indicated here as probably the original (and not the Clark variant). It can be seen on the front cover of most editions of Libertarianism in One Lesson.

The white lines descending from her right shoulder are closed, no longer reach the top, plus there was an evidently deliberate change to the far left tiara spike (viewer's right), making it straighter and tidier.

The swirl has changed enough that it's difficult to tell that the dark portions ever were separate.

The lower end details may reach down less far as well.

This severely muddled type was in use as early as 1980 and occasionally used through the early 1990s, appearing on some campaign materials for Andre Marrou. Unlike other variations, this one is almost never seen today, and is possibly only seen on materials produced during this time period.

Further study is needed to determine what caused its existence.

It deviates significantly from the other variants in multiple ways.

Fine point details are often missing, such as the upper rim of the torch, the tip of the flame shadow, and the lower, downward-facing points. The fingers of her right hand are typically mangled. The details on her upper right arm below her hand appear to be smoothed out. Her face is very seriously altered.

The vertical white lines from her shoulder to not reach the whitespace above, as with the Bergland and Browne variants. The lower details are missing in ways not present with other variants.

The swirl is closed as with the Bergland and Brown variants, and in one example is seen to close so as to look like two separate diagonal lines.

It also appears to have a wider aspect ratio.

The spikes of her tiara are consistent with the original, not the Clark variant.

This variant was released circa 1996 by the LNC, often in TIFF format, but dates back to at least 1993.

It is heavily streamlined and is missing a lot of the fine line details and has a slightly different aspect ratio.

The flame's shadow has been moved closer to the center.

It is almost always seen at the seven degree counterclockwise position.

Earliest known sighting: circa 1993, on the coffee mug for the 1993 Utah state convention.