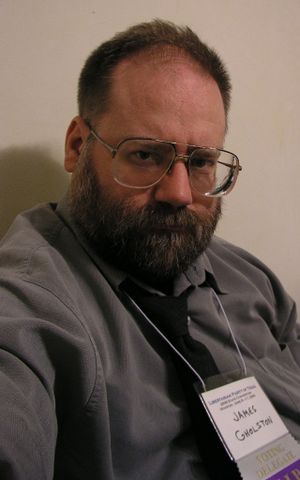 After the 2006 Texas LP Convention

James Gholston serves as treasurer for Signs of Texas Liberty PAC and Texas Candidates for Liberty PAC, as vice chair of the Denton County Libertarian Party, with the Libertarian Party Historical Preservation Committee, with Libertarian Statue Press, and on the board of the Radical Caucus as an at-large director. He served as a district 20 representative of the State Libertarian Executive Committee in Texas from 2001-2018, and has served twice as Denton County's chair.

He is president of Dimensionality, consorted, a small computer game company.

He served on the Moon Society Board of Directors from 2006-2009, and again from 2017 agter serving as secretary from 2013-2017. He is a sysop for Lunarpedia, Marspedia, and a few other space-connected wikis.

He has been actively working on LPedia.org since 2006.

Probably already all listed above; will try to think of some more.