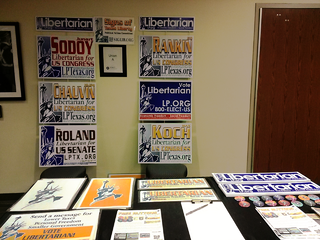 Signs of Texas Liberty PAC, or SIGLIB was started in 2005 with the intent of providing consistently branded signs for broadside level (paper, name, and low-chance active) candidates. It is currently organized as a federal committee only, and state level candidate support has been delegated to a newer committee, Texas Candidates for Liberty PAC.

The inspiration for the sign template was Carl Milsted's Economy of Scale Project.

Signs of Texas Liberty has provided approximately 2500 signs including support for 18 different candidacies as of August 2014, including:

In addition, 100 sign templates, with just the Libertarian statue of liberty inside a blue L were produced and 75 of them distributed at the 2006 Texas LP State Convention on the Houston/Humble city limits. As intended, these sign templates have been used outside of the control of the PAC, and what they have been used for is difficult to know. Some were observed in political demonstrations in 2007 and 2008.

Templates screen printed later in 2008 can be observed in the Alex Jones documentary The Obama Deception with the message END THE FED. 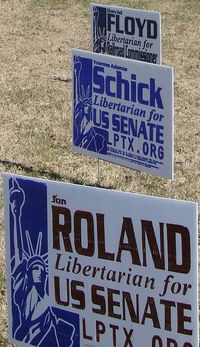 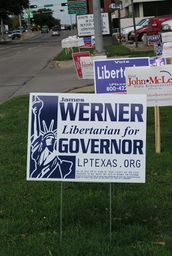 Also at the 2006 state convention was a small number of discs with graphics and a 2005 PDF presentation that had been handed out at the 2005 state party conference. There have been multiple updates, and the current draft can be accessed here.

The second and third editions were very similar and introduced the screen printing tutorial.

The fourth edition was the first with an actual cover and HTML interface, but was very poorly distributed.

The fifth edition has an improved, far more comprehensive HTML interface generated with a specialized application named Guadalupe, after the former office address for the Libertarian Party of Texas.

Current plans are for the subsequent editions to be produced by Libertarian Statue Press.