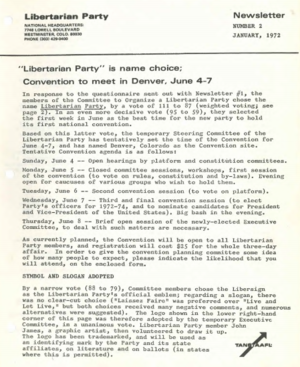 Monday, June 5 -- Closed committee sessions, workshops, first session of the convention (to vote on rules, constitution and by-laws). Evening open for caucuses of various groups who wish to hold them.

Tuesday, June 6 -- Second session of the convention (to vote on platform).

Wednesday, June 7 -- Third and final convention session (to elect Party's officers for 1972-1974, and to nominate a President and Vice-President of the United States). Big bash in the evening.

Thursday, June 8 -- Brief open session of the newly-elected Executive Committee, to deal with such matters are necessary.

As currently planned, the Convention will be open to all Libertarian Party members, and registration will cost of $25 for the whole three-day affair. In order to give the convention planning committee some idea of how many people to expect, please indicate the likelihood that will attend, on the enclosed form.

By a narrow vote (88 to 79(, Committee members chose the Libersign as the Liberarian Party's official emblem; regarding a slogan, there was no clear-cut choice ("Laissez Faire" was preferred over "Live and Let Live," but both choices received many negative comments, and numerous alternatives were suggested). The logo shown in the lower right-hand corner of this page was therefore adopted by the temporary Executive Committee, in a unanimous vote. Libertarian Party member John James, a graphic artist, then volunteered to draw it up. The logo has been trademarked, and will be used as an identifying mark by the Party and its state affiliates, on literature and on ballots (in states where this is permitted). 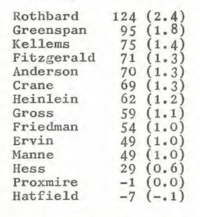 By a wide margin, the 52 people who returned their questionnaires by December 15th indicated that Murray Rothbard would be their first choice to be the Libertarian Party's Presidential nominee in 1972. Running well behind Rothbard, but well ahead of everyone else, was Alan Greenspan.

As with the other questions, the results were tabulated by giving 3 point for an "excellent" rating, 2 for a "good," 1 for a "fair," 0 if no response was given, and -1 for a "poor." On this basis, the 14 responsibilities given scored as follows; total point scores are given first, with composite ratings, to the nearest tenth of a point, in parentheses...

On the basis of these returns, the following judgments can be made: First, if it is at all possible to preside Rothbard to accept the nomination, this should be done. If not, any of the next five possibilities would probably be acceptable to a majority of libertarians; these same five people should also be given first consideration in seeking a VP nominee. The next bloc of five (Heinlein through Manne) are worth contacting for the VP nomination, if none of the top six can be persuaded. The bottom three can be eliminated as being unacceptable to most libertarians.

It should be emphasized, however, that it is by no means yet time to "close the door." The nomination will be determined at the Convention in June, and entries will be welcomed up until that time; several new possibilities have been suggested, in fact, and will be contacted if none of the front-runners above are available.

Copies of the platform will be sent to all but the bottom three of the people listed above, along with a letter soliciting their reactions. Those who respond favorably will then be sounded out regarding their willingness to run on our ticket. To help persuade Dr. Rothbard that he should seek the Presidential nomination, we suggest that all LP members send him a letter or postcard using him to run; if possible, get up a petition among the local libertarians, and/or have them write to him too. His address is Box 341, Medison Square Station, NY 10010.

Extra copies of this Newsletter may be ordered at $1 for 10.

If you have any comments, pro of con, concerning the Temporary Platform, please send them in, on the back of the enclosed reply form. Your opinion counts!

A copy of our new Membership Application is enclosed with this issue; if you're already a member, you need not fill it out, although we'd appreciate having the information. Members of the Organizing Committee who have not yet joined the party, please fill out the Application and return it with your 1972 dues, if you wish to remain on our mailing list. No more material will be sent to people other than Party members and Newsletter subscribers after this mailing -- so join now!

Additional copies of the Membership Appliatoin are available, free on request.

Libertarian Party Chairman are needed in all states except [[Colorado Libertarian Party}Colorado]]; if you are interested and willing to spend the time and effort necessary to build a Party organization in your state, write and let us know. Include a resume of your political experiences.

This is going to be a grass-roots party; the national office will not be able to do the organization work int he various states. We will provide literature, ideas, and names of people who inquire for info, but you will have to get things going in your state yourselves. So, let's get going!

To LP Vice-Chairman Pipp Boyls, for drafting the Temporary Platform (after much consultation with others).

To John James, for donation of his graphic talents to render our Party logo.

To Reason, Hard Core News, SIL News, A is A, NYLA News, and Quillon for their "mentions" of the Party in recent issues.

A good source of data on how Uncle Sam throws our money away is the new book, Where the Money Went, which documents losses totaling $179 billion incurred by government "enterprises." Order from Fact Sheet, 6413 Franklin Avenue, Los Angeles, CA 90028. $1.25, paperback.

Information available form LP Member Mike Timko, 11444 Olympic Blvd, #96, Los Angeles, CA 90064. This is one way we can increase our "muscle," get publicity, and win recruits.

Listed below are the requirements for getting on the ballot in 42 of the 50 states. WE cannot guarantee 100% accuracy, as the requirements change with time, but in most cases they should be correct. In some states, the requirements vary from office offices hence the ambiguous figures. Also, for some states there is more than one date given under the "petition deadline" heading; the earlier is the opening date for circulating petitions, and the latter the filing deadline. If you live in the District of Columbia, or in one of the eight states we lack data for, we would like to hear form you regarding the situation where you live. The missing eight are: Alabama, Alaska, Delaware, Idaho, Iowa, Mississippi, Nebraska, Tennessee. States where we appear to have the best chance are denoted by three asterisks.

Most states require that minority parties have their nominee named before they can circulate petitions. This means any states with deadline before July are probably out. Any correction, additions, or clarification to this listing would be appreciated. Also, any news of efforts to obtain petitions, where it is possible.

The rules are simple. The LP member who recruits the greatest number of additional members between January 1, 1972 and April 30, 1972 will receive an award of $100, to be applied towards convention expenses; the award will be presented at the Party's national convention, in June.

Second prizes of $50, and third prizes of free convention registration (value, $25) will also be presented. Depending on how things go, fourth prizes of some sort may also be awarded.

All Party members except the national officers are eligible to compete, but you may not count your own membership towards your point total. To receive credit for new memberships, the members you recruit must name you as the person who caused them to joint the Party, in the space provided on the Membership Application -- so be sure to tell people whom you recruit to do this.

The first prize of $100 towards convention expenses will be awarded to only one individual, who must earn a minimum of 100 points in the contest.

To give everyone some help in recruiting members, the national office will provide any member who wishes with as many Membership Applications as he or she can reasonably use, free of charge. In addition, copies of the enclosed ad preprint may be obtained for 2 cents each, after you have used up the 10 free copies included in this mailing. Copies of the platform are available, at 4?$1, 10/$2, 25?$4, 50?$7, and 100/$12. Use the enclosed form to order material.

The enclosed ad preprints should not be handed out on a willy-nilly basis. Give or mail them to ten people whom you know to be good prospects for recruitment. If you are mailing them, enclose a personal letter encouraging the recipient to join, and telling him to cite you as his source of information about the party.

Write or stamp your name on the preprints, to give people someone to contact locally, if you do any mass distribution. If you're going to distribute more than 250, stamp or type your name on one of the enclosed copies, and have your local printer reproduce it; this is faster and cheaper than ordering from the national office.

If you can get the ad placed in any publications, this is a good way to reach people -- especially if you can do so without cost. Add or substitute your own name and address before doing so, however.

If you are a student, place copies on bulletin boards and on other suitable places around the school; again, add your own name and address or phone number.

If you can, arrange to speak to local taxpayers groups, and/or civic organizations, about the Libertarian Party. Have sufficient copies of the platform on hand to give out copies to those who show interest. Try to get local businessmen to sponsor placements of the ad in the local papers, if you can't get a freebie placement.

If you are a student, organize an LP? chapter on your campus; get your school paper to run the ad, and/or news stories.

Seek out the local or state representative of the following organizations, and try to get an invitation to speak before them. If you don't know who to contact, write the national headquarters of each, and ask for the name of the contact in your area. Do not say why you want the name, when you write. Have copies of the platform when you make your presentation -- and use common sense regarding which points in the platform to stress in making your presentation.

When you write, ask for information on the organization, so as to have a good idea of what points to stress in your talk.

And don't forget local Republican and Democratic organizations -- especially YRs and YDs. They won't let you make a presentation, but you might attend a couple of meetings, and then approach those members who seem disaffected with their current party, and inclined towards a libertarian point of view.

Above all, when making presentations, keep your cool, and don't get into heated arguments. Try to avoid becoming stereotyped as "leftist" or "rightist." And do not use the word anarchist. Also avoid the words communist and fascist, unless you're talking about someone generally regarded as being in one of those categories.

GO BACK TO INDEX OF LP NEWS
Retrieved from "http://lpedia.org/w/index.php?title=Document:LP_News_1972_January_Issue_2&oldid=1549664"
Categories: