Alex Merced (born June 30, 1985) is an American author, blogger, marketing consultant, financial industry corporate trainer and Libertarian pundit. Merced runs a YouTube channel where he discusses Libertarian ideas such as individual liberty and free markets. Alex Merced is also the founder of online commentary website, LibertarianWingMedia.com. He ran for Public Advocate of New York City in 2013, getting 10,400 votes. He ran for US Senate from New York in 2016 where he got 48,036 votes. Alex Merced also ran for NYC Comptroller in 2017 getting 5810 votes. In 2018 he was the Policy Director or the Larry Sharpe for New York Campaign. He was Vice-Chair of the Libertarian National Committee from 2018 to 2020 and presided over the second sitting on the 2020 National Convention.

Alex Merced was born in Hartford, Connecticut in 1985. His mother is from Guatemala and his father from Puerto Rico.[1]

His parents divorced after giving birth to his little brother. Merced's mother worked multiple jobs to raise her children while going to school. She eventually graduated, got a job, and bought a house in the suburbs.[1]

In High School Alex attended Howell Cheney Technical Vocational School. During this time he read Anthem by Ayn Rand, which Alex "found compelling and always held in the back of his mind as it sparked a deep value for individuality".[1]

Merced is a graduate of Bowling Green State University in Ohio where he got his B.A. in Popular Culture Studies and minored in Marketing. He was a host for the local college radio station (WBGUFM 88.1FM), he would spend time promoting concerts in the BGSU music scene under the brand, "Fashionably Numb Music". He also owned a hobby retail store called The Gamers’ Lounge, which eventually closed before he graduated.

During a trip to Manila, Merced watched the Fox Business News debate between Rudy Giuliani and Ron Paul, which heavily influenced his Libertarian views.

After graduating in fall 2007, Merced moved in with his father in Long Island. He worked at a marketing internship at High End Shoe Brand Shane and Shawn. Later, he was a Stock Broker for E1 Asset Management and worked at Greico Financial Training as a Training Specialist training people across the financial industry.[1][2]

In 2008, Merced started a vlog on his YouTube channel where he discusses Libertarian ideas such as individual liberty and free markets. Alex over the years has curated many of his videos for easier access at websites such at Libertarian101.com, LearnEconomicsNow.com and IntrotoLiberty.com[3]

in 2016, Merced ran for Senator of New York[7][8][9] in order to unseat incumbent Chuck Schumer. “And neither of the two candidates in the senate race (Schumer and Long), or neither of the major presidential candidates, Trump and Clinton…have talked seriously, in a productive way about the drug war or foreign intervention abroad in a way that would save lives. I tell people , ‘a vote for libertarian is not just a vote against two major parties, it’s a vote for life and death. You’re voting for the only party seriously talking about policy interventions that would save actual lives.” says Merced.[10]

His platform involved lowering regulations, a 20% flat tax on income with an age based tax credit, rainy day saving accounts to replace IRA/HSA/Coverdell accounts, ending the war on drugs, and rolling back regime change in foreign countries.[11] He was endorsed by 2016 Libertarian nominee Gary Johnson, runner up Austin Petersen, Will Coley, Vermin Supreme, Founder of Everything Transgendered Jennifer Louise Lopez and four republican Candidates for New York State Assembly.[12]. In the 2016 election Alex Merced got over 48,000 votes.

in 2017, Merced is ran for NYC Comptroller campaigning mainly on the comptrollers role in advising the investment of pensions funds. Alex Merced made the case that the pension fund is structurally building in too much risk exposing pensioners to losses and taxpayers to being subject to "catch up" contributions. In the election, Alex Merced got over 5800 votes for his run for Comptroller.[13]

Alex Merced was serving as the Policy Director on the executive team of the Larry Sharpe for Governor of New York 2018 Campaign. In order to focus on his campaign for Vice-Chair, Alex Merced took on a different role as Senior Policy Adviser.

After being Vacated by Larry Sharpe, Alex Merced took of the role as the Region 8 Alternate on the LNC. He did not run for re-election in the seat and as he was elected Vice-Chair. He was replaced by Jeff Lyons.

2018 Candidacy for Vice-Chair of the Libertarian National Committee

Notable Moments During his Term

2018-2020 Term as Vice-Chair of the Libertarian National Committee

Things Alex Merced has done during his term as Vice-Chair:

In 2020 the National Convention due to the Coronavirus Pandemic split it's National Convention into two sittings. An online sitting held in May and a hybrid live/online sitting in July (Both firsts in LP History). Alex Merced presided over the final moments of the online sitting and over the entirety of the July hybrid sitting. The chaotic nature of the untried hybrid format made for many memorable moments, out of appreciation for presiding many of the delegates signed a Jo Jorgensen sign and presented it to Alex on stage during the convention. Also, a meme (see the Day 1/Day 4 of the Convention Meme) made by David Cox became viral among membership perfectly capturing the essence of the event. This was the ending of Alex's term as Vice-Chair, being succeeded by Ken Moellman.

After presiding over the National Convention in 2020 Alex Merced decided to write up an article with advice for future delegates on LPedia. Merced's Delegate Guide 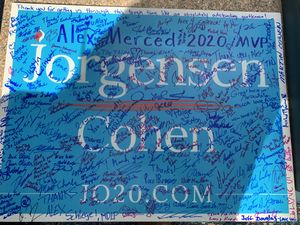 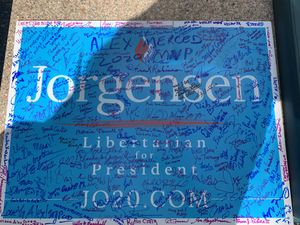 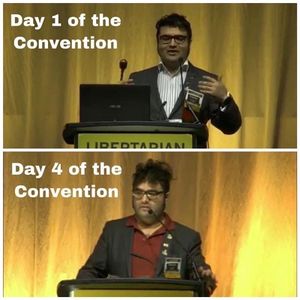