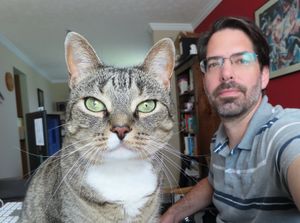 Moxie took a selfie with ED in the background

Edward "ED" Fochler has been a dues-paying member of the Libertarian national party since 2016 and lifetime member as of 2018. His background includes enlisted service in the Army, and work in network and computer security and system administration. He is one of the admins of LPedia.org focusing on back end stability, scalability, security etc.

ED is committed to bolstering the reputation of the Libertarian Party as a significant and enduring American political party. Not because Libertarian ideas are the only good ideas, but because America needs another significant political party if we are to avoid an echo chamber of self serving bad ideas being promoted by the two larger political parties. "You can't have three independent branches of government run by two parties."

You can reach Edward at lp@liquidbinary.com