Original Typed Draft of the Hospers Statement of Principles

By an extraordinary confluence of events, the Libertarian Party Historical Preservation Committee has come to be in possession[1] of the original typed draft copy of the Statement of Principles as written by John Hospers. Originally, LPedia had housed a poor scan of this document from an unknown source and the location of the original had been unknown. This scan can be viewed below at the highest resolution that existed.[2] 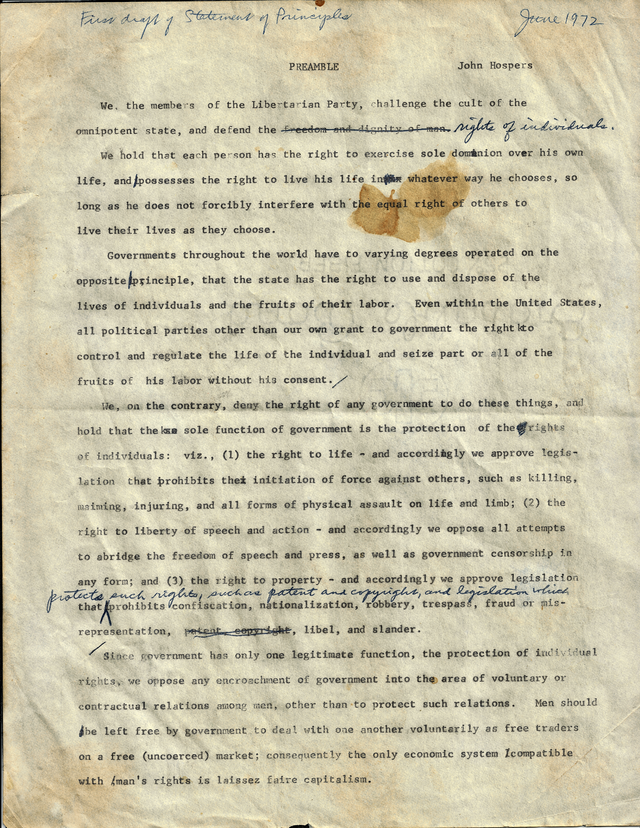 On August 4, 2017, Caryn Ann Harlos was randomly checking eBay for historical Libertarian Party items and saw that the original typed document was being offered for sale.[3] Excitement ensued. Several known LP historical enthusiasts were bidding but it seemed at the last minute an unknown bidder snapped the item up at $430.00. [4][5][6]After some despair and self-consolations, it was revealed that fellow group member Lellius Rose was the final bidder as he wanted to ensure that it was obtained and donated to the Party.[7]

On August 12, 2017, Laurie Stover, the seller of the item, provided this background information.

Here is the original document (click here for fullest resolution). It is unknown if the coffee stain is original or occurred later on. It is obvious that the prior low-quality scan is of the same document. There is still some mystery about its travels but many holes have been filled.