Jackson attends Regent University where he is completing coursework for a degree in American Government and Politics; he also writing a series of essays to serve as a theoretical example of how a Libertarian Government would function in the United States.

Jackson Passananti first registered to vote in 2014, having grown up with a father who was a member of the Democratic Party and a mother who was a member of the Republican Party, he was unsure where exactly his allegiances lie. He conducted countless hours of research into both left- and right- ideology and participated in several online questionnaires hoping to determine which of the two parties best aligned with his beliefs. Deciding he was more concerned with socially liberal policy than he was with fiscal policy, he joined the Democratic Party.

In 2016 Jackson joined www.politicalforums.com in hopes of being able to discuss political ideology with intellectuals who would be open to debate instead of the hard-headedness that typifies political ‘debate.’ There he published a short paper titled “Why Minimum Wage Must Be Raised,” in which he laid out his belief that minimum wage should be a living wage if and only if, the wage was being used to provide the most basic essentials for the employee (this did NOT include the employee's spouse or children). He listed the most basic essentials as:

Jackson relied heavily on the Minimum Wage Act of 1938 to frame his argument.

Later, on the same site, Jackson expressed interest in creating a new party which combined elements of both major parties; a few hours later he received a private message asking whether or not had ever heard of the Libertarian Party. The message also contained a link to www.lp.org. After a thorough review of the Libertarian Party Platform, Jackson switched his registration to “Libertarian,” and voted for Former Governor Gary Johnson in the 2016 Presidential Election. 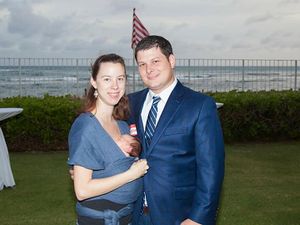 Jackson attended his first political event in October of 2016, this event was a presentation by Candidate Tom Arnold in Honolulu, Hawaii. There he met fellow Libertarians for the first time. Aside from this event Jackson was not politically active (Facebook posts not withstanding) in 2016 or 2017.

In January of 2018 Jackson returned to the United States following a military deployment, now having the time to participate in political activism, he searched for the local party on Facebook and attended a meeting of the "Greater Boston Area Libertarians." There he met several inspiring individuals: Daniel Fishman, Jeff Liatháns, Callum Melrose, and Derek Newhall among others. He would later work closely with these men on the Petition Drive Campaign (a movement designed to get Libertarian candidates on the ballot). Their efforts were successful, two of the three campaigns Jackson participated in gained ballot access in 2018.

One of the most notable events he attended was "Liberty Hour with Bill Weld," where the Former Governor and Vice Presidential candidate officially endorsed Daniel Fishman's campaign for Auditor of Massachusetts. At that event Jackson volunteered to work with an organization called Voter Choice Massachusetts to help spread awareness of Ranked Choice Voting (RCV). Since then he has attended three events as a representative of that organization, most notably the 2018 GOP Convention in Massachusetts. 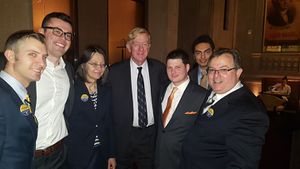 Since August and continuing so far in 2019, Jackson has been focusing on his studies; he hopes to step back onto the political scene during the 2020 political season.

Below are the two issues that currently weigh most heavily on Jackson's mind.

The political issue closest to Jackson's heart is the question of term limits. He believes the failure to include term limits (term limits being defined as both a maximum number of years per term of elected office AND a maximum number of terms a politician can serve) in the US Constitution was the greatest mistake the authors of the Constitution made. He believes that, like the Office of the President, no political office - from County Representative to United States Senate, should be able to be served for more than two terms (consecutive or otherwise) by the same person.

Fellow Libertarians have stated that term limits may be an anti-libertarian position due to the fact that the people should be able to choose whomever they want as their representative for as many times as they want. Jackson disagrees, stating that term limits would encourage growth and change in the American political climate; with an ever-changing group of politicians to vote for, Americans would need to research the candidates and fully grasp their political beliefs in order to make an informed decision instead of voting for the name they are most familiar with.

Like many Americans, Jackson believes the electoral process in the United States could use some improvement. The two biggest issues with the electoral process are campaign expenditures and under-representation of the American public. He believes that at least one of these issues can be tackled with a change from a First-Past-The-Post system to a Ranked-Choice-Voting system (there are other voting systems Jackson is interested in, but RCV seems most likely to be implemented in the near future). He believes that since RCV allows voters to rank the candidates in order of preference, the voters would be better represented no matter which candidate ended up victorious because the system requires at least a simple majority to win. Furthermore, because candidates would need to worry about becoming the first, second, or third choices of all constituents in their regions, the candidates would focus on why their policies are more beneficial than the policies of their opponents instead of simply bashing the other party or parties. Therefore, Jackson holds the conviction that a system like RCV would provide both better representation and better political candidates to choose from.