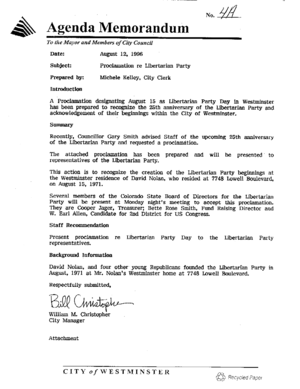 Agenda Memorandum To the Mayors and Members of City Council

The attached proclamation has been prepared and will be presented to representatives of the Libertarian Party.

This action is to recognize the creation of the Libertarian Party beginning at the Westminster residence of David Nolan, who resided at 7748 Lowell Boulevard, on August 15, 1971.

Several members of the Colorado State Board of Directors for the Libertarian Party will be present at Monday night’s meeting to accept this proclamation. They are Cooper Jager, Treasurer; Bette Rose Smith, Fund Raising Director and W. Earl Allen, Candidate for 2nd District for US Congress.