There is no denying it. It is 2020, a presidential year, and the election is coming for all of us whether we are paying attention or not.

First, there is something that needs to be remembered and highlighted. In 2016, the Libertarian Party set records and accomplished what no other alternative party in America has managed in modern times. In receiving 4,489,233 votes, the Libertarian Party increased our highest amount of votes achieved by over 250%! In only four years we didn’t just double our support, we more than tripled it! In 2012, the Libertarian presidential candidate received 1% of the vote for only the second time since we ran our first candidates in 1972. Only four years later, we blew past that 1% expectation and secured 3.3% of the vote. It can be easy to write ourselves off like mainstream media and old party supporters always do — but do not let the unprecedented gains we are seeing get lost in the sea of political negativity that plays on a loop during election season. The truth is, more and more people are acknowledging the failures of the Republican and Democratic parties and are flat out rejecting their big-government candidates; and they are looking for liberty. 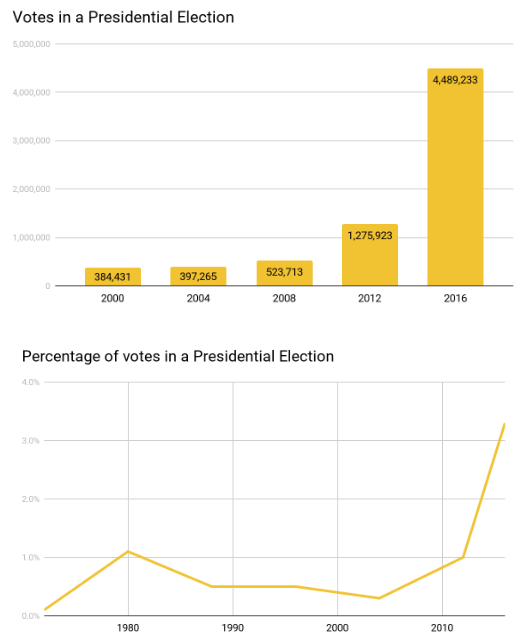 This upward trajectory is continuing at the same time as the GOP is cancelling primaries and the DNC is melting down after a spectacular failure of organization at the first caucus of the 2020 election. It is not surprising that authoritarianism and incompetence are not inspiring many Americans to stick with the staus quo.

Tonight, the nation will be hearing a State of the Union address presented by President Donald Trump, currently caught up in an impeachment trial, which a narrow majority of Americans believe should remove him from office. We are likely to once again be fed a list of vague accomplishments; some true, some misleading, some complete lies. We are certain to hear a speech chock-full of insults toward Democrats, perhaps even including some of Trump’s favorite one-liners and nicknames. Following that display of a grown man hurling schoolyard taunts, there will be a response, from a Democrat, ready to return those insults and taunts with more of the same. How can we know this? Well, we’ve all seen this before. Again, and again... and again. 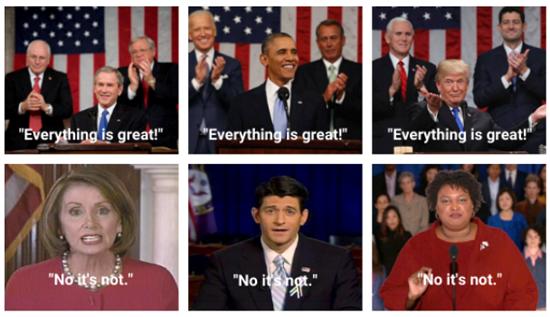 These things are never going to change — not as long as the old parties continue in power. No amount of thoughts and prayers or working within their corrupt organizations is ever going to break this cycle. The only thing that will put an end to the insanity of today’s political theatre is defeat of both Republicans and Democrats with an election of a president who is not beholden to any politicians and does not owe a dime to their political machines.

We are told every two years that this is “the most important election of our lifetime.” This phrase loses any validity when, like a broken record, it is repeated unceasingly, and we are meant to pretend we didn’t hear this the last time our votes were coveted. However, this overused cry for attention is not completely false. As Republicans and Democrats claim once again that “there has never been such an important election,” what they are actually saying is, “Not only did we not fix anything when we said we would — we actually made it worse.” In 2016, the national debt was $19 trillion. In 2020, we are looking at $23 trillion and climbing. In 2016, the US was engaged in military conflicts in Iraq, Syria, Pakistan, Afghanistan, Libya, Yemen, and Somalia. In 2020, you can switch out Pakistan for Iran and add Niger to the list. All of these wars and entanglements are paid for by US tax dollars, and considered authorized by an AUMF signed 18 years ago. Republicans celebrated a tax cut in 2017 and followed it up by supporting all of President Trump’s tariffs — and as we know, tariffs are taxes.

War, taxation, debt — these are all things that have been done under presidents from both old parties and with bipartisan support in congress. This is why nothing can change just by switching out one big-government authoritarian with another one; they don’t offer you anything new. When you support the Republicans or the Democrats, you support keeping us on the same collision course we have been on for decades, each year approaching complete disaster faster than the year before. So, once again, this really is the most important election of our lifetime.

So what happens when you abandon the unprincipled old parties? While there is no predicting this wild world we live in, there are arguments for a path to the presidency for the Libertarian Party. There is significant value to sending a message with your dollars — and with your vote. It is not lost on the power brokers behind the duopoly that people are fleeing from their ranks every day. According to the most recent Gallup Poll numbers, Republicans and Democrats are tied, each with 27% of voters willing to associate with them. As of this month, 45% of voters in America have emancipated themselves from the status quo and are in search of, or have found, a better option. As that number grows, and as fewer and fewer votes are cast toward the right or the left candidates, the message to the old guard is clear — their days are numbered.

While Libertarians continue the fight to stay on the ballot in all 50 states, lawmakers across the country actively write and pass legislation to limit options on the ballot. Supporting the Libertarian Party sends a direct message that you reject the Republicans’ and Democrats’ war on choice. When you support the Libertarian Party, you support Libertarian Principles. By this definition, principles remain the same no matter what else happens. It doesn’t matter if a Republican or a Democrat is president. A Libertarian is always going to favor peace over war, and will never support American entanglements that result in many innocent deaths. Libertarians will never vote to authorize unending spending that bankrupts this country for the next generation. Even while impeaching President Trump and declaring his every decision to be against the good of the nation, Democrats by and large joined Republicans to authorize a military budget, handing the president billions more dollars to wage wars and build his Space Force. You have nothing to gain by supporting either power-hungry party, and everything to lose by not raising your voice against their combined assault on liberty and sanity.

The Republicans are going to offer you Trump again and ask for your vote. If he is reelected, you will have more rhetoric against him, but Congress will still vote in their own interests whether it helps him or not. If the Democratic candidate wins, we’ll have more spending and maybe Republicans will pretend to be fiscal conservatives again — at least until power flips back to them. It’s also likely that Republicans will attempt to impeach whoever the next Democratic president is just out of spite, further wasting taxpayer time and money.

Support the infrastructure for the next Libertarian bringing principle to government. Donate to our Ballot Access Fund or our General Fund to assist the party in laying the early groundwork for another record-breaking year. You can be a major factor in taking the next great leap for the party. We ask you to join us in rejecting old party ways and making sure we apply aggressive pressure toward Libertarian gains at the polls this Presidential cycle.

Will you stand beside us this election year?