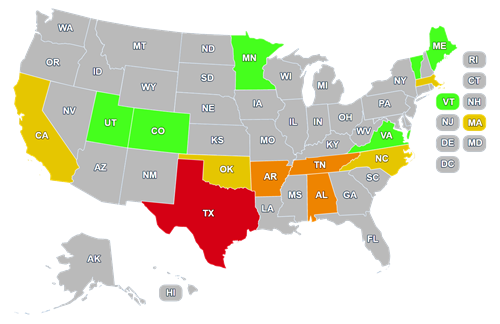 Whether you are voting today, waiting for your state convention, or still trying to decide what to do, we’re here to help. In honor of the 15 different groups of voters trying to figure out what to do today, here are…

1. The Libertarian Party is the only anti-war party.

You cannot count on Democrats to end the wars — they have been every bit to blame as the Republicans. While in the midst of trying to impeach President Trump, a bi-partisan Congress approved a military budget of over $700 billion. Neither old party has any intention to ease up or end our military interactions. If you are ready for an America at Peace, it’s time to vote Libertarian.

2. The Libertarian Party is the only party committed to eliminating the national debt.

Republicans have long been considered the anti-debt party, but that can only be laughed at now. After eight years of calling out President Obama’s reckless spending and increased deficits, they have been silent and/or outright supportive of Trump’s explosive spending that has taken our national debt from $19 trillion to $23 trillion in three years. If an annual deficit of $1 trillion dollars is unacceptable to you, your best move is to vote Libertarian.

3. The only way to stop more government overreach is to vote for the Libertarian Party.

Increased taxation for “free” college is promised by the Democrats; tariffs (which are taxes) and bailouts are executed by Republicans. Both old parties are inching or running toward single-payer healthcare, more gun control and granting the executive branch more and more power. The only choice for those who care about personal and economic liberty, separate from the boot of big government, is the Libertarian party.

4. The only way to send a message to the ruling old parties is to vote for the Libertarian candidate.

Once again, the only alternative party that will be on every ballot in the 2020 general election is the Libertarian Party. A vote for Trump sends the message that nothing needs to change. A vote for any of the Democratic candidates likely to get the nomination is a message that nothing they do needs to change either. We currently have more people choosing not to vote for anyone than to pick one of the options the Rs or Ds serve up, and that does nothing to wake up these power-hungry politicians. If your hope is to see better candidates coming from any party, the only way to send that message is to scare those who rule over us by voting Libertarian.

5. Libertarian policies benefit everyone, and they get adopted the more voters show support for such things.

It seems hard to believe that the Democratic party was officially still against same-sex marriage less than a decade ago. The Libertarian Party has supported equal rights (and removing the government from marriage) since its founding in 1971. Both parties are still waffling on if people who chose to use cannabis for medical or recreational purposes should go to prison. Many states have changed their laws, while federally some lawmakers are looking to add vaping as a crime. The Libertarian party has supported individual liberty (and no victim, no crime) since its founding in 1971. The liberty movement does affect the public view of issues and eventually leads to better policies. If you want to see more Libertarian policies adopted by old party representatives, you show them that by voting Libertarian.

Voting for the lesser of two evils is still attaching your name to something evil. It sucks. Don’t do it. Vote Libertarian.

7. Because you “Support the Troops”.

Democrats and Republicans both like to act like they are moral patriots who value nothing more than the brave men and women who serve their county. Truth is, they are lying. If they really cared about the troops, they would never flippantly start a new war, they wouldn’t refuse to do their job to vote on military action, and they would certainly spend much more time talking about the 22 veterans a day who commit suicide. War is a failure on every level, and we fail our service men and women once they return home. Do you support the troops, really? So does the Libertarian Party.

8. Consistent Principles only exist in the Libertarian Party.

We already mentioned the Democrats’ evolution on rights for gay people only when it became politically beneficial to them. Republicans say they support your Second Amendment rights, until Trump says we need to limit that a bit. Both old parties jump around on which personal decisions they will allow and which they will criminalize. In their histories, the ruling parties have changed their principles drastically. The Libertarian Party platform has held consistent values of individual liberty since it was first written in 1971. Do you want to know that the party you support is going to hold to the values you supported them for? Your party is the Libertarian Party.

9. The Libertarian Party supports ending harmful election laws and opening up the ballot for other parties too.

Perhaps you feel that another party best represents your views, but they do not have ballot access. Republicans and Democrats write the very laws that keep alternative parties off the ballot or using all of their resources to get on the ballot. Libertarians believe the duopoly has to be defeated if we will ever see real and meaningful changes in this country. A vote for the Libertarian candidate is a vote for allowing more candidates and more parties of future ballots, and an end to the ruling parties ability to force you to choose between two terrible candidates.

10. The Libertarian Party is the most welcoming to immigrants and refugees. If you believe children should never, ever be separated from their parents and held in government custody for crossing a political border, you can be sure that the Libertarian Party agrees with you. Democrats and Republicans will continue to argue over miniscule changes - the Libertarian Party will end this insane and dysfunction humanitarian crisis by legalizing the free movement of peaceful people.

11. Because you do not want to live in a {insert religion here} theocracy.

Libertarians believe that everyone should be able to hold faith and religion as important or irrelevant to their life as each chooses and that the government should never propose policies or laws based on the support or opposition of any religion.

It’s funny how often you hear Democrats talk about getting money out of politics, while they promise to pay for college, healthcare, retirement, childcare, and on and on. That is every bit “money in politics” as corporations and lobbyists writing huge checks. Libertarians want to return the executive branch to the limits our Founders intended — that means removing the authority to make such false promises, either to special interest groups or the general public.

13. You support Free Speech — for everyone.

14. Reject Nationalism and Socialism with one vote.

There are two broken ideologies threatening liberty in our nation today, and they are coming from both major parties. Reject the inhumanities we know come from these authoritarian philosophies, and support liberty instead.

15. Libertarians do not seek power - they seek a world set free.

Republicans and Democrats continue to fight over which one best knows how you should live your life. Libertarians know that they best thing for individual humans is to be free to live their life without the approval of any political party.

Can you think of anymore? No matter which one of these reasons rings the truest for you, remember that when you go to vote. Even if you are not voting today, you can still cast a vote for liberty, fiscal responsibility, human rights, and integrity by supporting the party of principle. We are proud and honored to be the voice for freedom in America today.