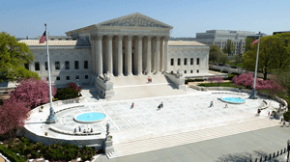 If the First Amendment means anything, it means that the Federal government has no business telling political parties and people that they can spend more money on certain kinds of political speech and less money on other kinds of political speech. Nor does the First Amendment allow the government unbridled power to restrict the legacies that Americans leave political parties upon departing from this world. The dead do not haunt political parties, enforcing corrupt deals struck in exchange for their bequests. The Libertarian Party is asking the Supreme Court to reverse a lower court decision that contravened both of these critical free speech principles.

In a divided decision, the United States Court of Appeals for the District of Columbia Circuit upheld hastily drafted campaign finance rules that allow a party to receive a maximum of $355,000 per year from an individual, but only spend $35,500 on unrestricted political speech. The other $319,500 would have to be spent in three narrow government-approved categories, “presidential nominating conventions,” party headquarters buildings, or “election recounts and contests and other legal proceedings.” The appellate court also divided in upholding the application of contribution limits against a bequest left to the Libertarian Party by a deceased donor, even though the party had no knowledge of the gift before the donor’s passing, and as far as anyone knows, can do nothing to please or offend him in the afterlife.

“The core of the First Amendment is the fundamental right to engage in political speech that the government doesn’t approve of. The Libertarian Party knows our ideas are unpopular with the two old parties and Federal bureaucrats, but that doesn’t give them the power to restrict our speech to those purposes that they approve of,” said Libertarian National Committee Chairman Nicholas Sarwark. “And while we appreciate being remembered by our supporters in their wills, we surely cannot rely on such promises, nor can we be controlled by people who are no longer with us. We hope the Supreme Court will grant this petition and strike down these unconstitutional restrictions on the free speech rights of all Americans.”

Donate to our Legal Fund [1]