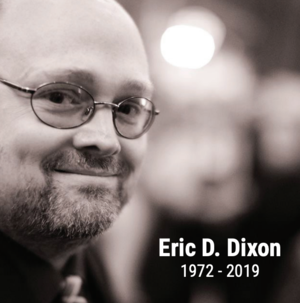 On Aug. 21, LP Headquarters lost a valued staff member and the liberty movement lost a great ally. Eric D. Dixon, longtime staff member at LPHQ left us all to carry on without him.

Eric held a bachelor’s degree in journalism from Brigham Young University, and although he originally planned to pursue a life in newspapers, he never got over his 1997 internship at the Cato Institute.

He kept a foot in both journalism and public policy, working for [[Atlas Network, the Show-Me Institute, U.S. Term Limits, Americans for Limited Government, the Cascade Policy Institute, Liberty Magazine, the Oregon Newspaper Publishers Association, the Idaho Freedom Foundation, and the Idaho Press-Tribune. In that time, he worked as a writer or editor on dozens of academic policy studies; hundreds of op-eds, articles, briefings, and press releases; thousands of blog entries; and much more. He also was an early adopter of new technology, designing and maintaining websites since the mid1990s, ranging from complex data-driven institutional sites to smaller nonprofit and e-commerce sites.

Eric was a film and music buff with impracticably sprawling collections that made him a coveted member of local trivia teams. He recently had moved to Falls Church, Va.

Eric began working for the Libertarian Party in December of 2012, and in one form or another remained involved in keeping the LP looking professional until his passing. A copy editor par excellence, Eric also had the gift of language. He edited many things in his tenure at the LP, but he also created wonderful original pieces that were widely shared.

I cannot see off the craftsman of beautiful passages without one in tribute to him:

And one clear call for me!

And may there be no moaning of the bar,

When I put out to sea,

But such a tide as moving seems asleep,

Too full for sound and foam,

When that which drew from out the boundless deep

And after that the dark!

And may there be no sadness of farewell,

For tho' from out our bourne of Time and Place

The flood may bear me far,

I hope to see my Pilot face to face

When I have crost the bar.