Under California law, citizens may indicate their affiliation with a political party when they register to vote. Voter registration forms include a set of check boxes for "qualified" parties, as well as a space for writing in the name of a non-qualified party. Voters also have the option of not indicating an affiliation. The terminology for this unaffiliated status has varied, with "Decline to State" having been used for much of the time since the LP has been active, but the current term is "No Party Preference".

The specific implications of being a "qualified" party have varied over time as the system used for primary elections has changed. The Libertarian Party of California has been a qualified party since 1980, and the LP is often described as having "ballot access" in California, but this does not have the same meaning as in some other states. Except with respect to presidential elections, where qualified party status enables the LPC to place the LP's nominee on the November ballot, the LPC does not have the power to place any candidate on the ballot in either the primary or the general election. Under the current system, for all other offices for which a party label is allowed on the ballot, all candidates of any party, as well as candidates who want to run without a party label, must individually pay a substantial filing fee or circulate a petition with a significant number of signatures before their name appears on the ballot, and these requirements are the same regardless of party. Also, party status plays no role in elections at the county and lower levels -- all such elections in California are "non-partisan".

The main implications of registering with a political party under California's current election system for state and federal offices are: (1) Only a candidate who is registered with a party may have that party's name listed by their name on the ballot. (2) This party affiliation information is maintained by each county, and is available for use by candidates and political committees (including the LPC and its local organizations) for campaigning, fundraising, and related activities. In addition, the LPC itself has a rule that for a member to have voting status with respect to internal party business, that person may not be registered to vote with any political party other than the Libertarian Party. 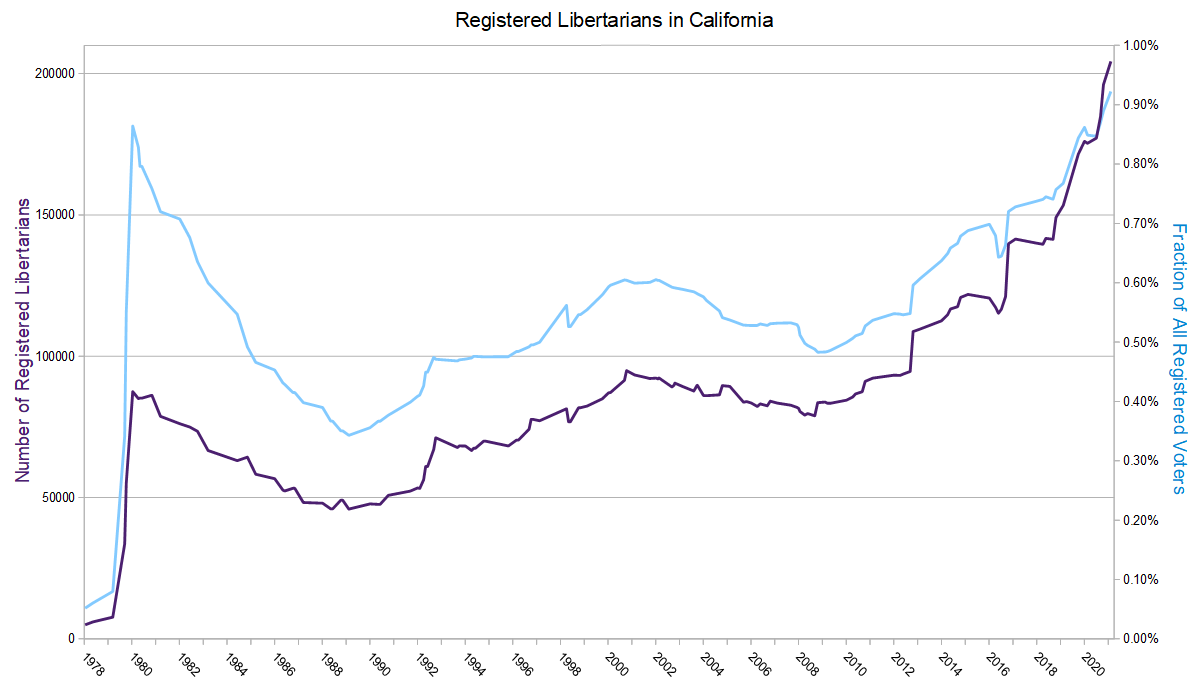 Voter registration counts vary over time not only because of changing levels of actual support, but also for technical reasons. Many people register to vote in the time shortly before a major election, often resulting in temporary spikes in counts. Removal of names from the voter rolls in an effort to weed out people who are no longer actually eligible to vote in a given area, either on an ongoing basis or in the form of occasional "purges", can cause declines in the counts that don't reflect any real decline in support. Also increases in the number of registered voters take place in the context of a generally increasing population. This graph shows both the absolute number of voters registered Libertarian (scale on the left) and the fraction of all registered voters who were registered as Libertarians (scale on the right). 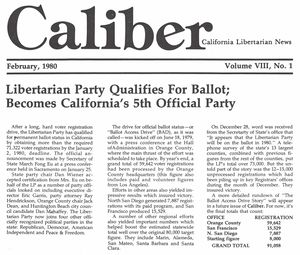 California election law provides two ways that a new party can become "qualified" -- by a petition or by getting people to affiliate with the party via registration. Since the number of signatures required for the petition method is ten times the registration requirement, new parties that have any aspiration to be a continuing force in the political system generally choose the latter option.

The LPC conducted a major registration drive beginning in 1979 to become a qualified party. Prior to this time, there were only a few thousand voters registered Libertarian in the entire state. Qualification was achieved in early 1980, with the January report by the Secretary of State showing a statewide total of 87,460 registered Libertarians, comfortably over the then-required 71,322. This represented 0.86% of all registered voters in California at that time.

As a result of this effort, candidates were able to appear on the ballot in California with the label "Libertarian" for the first time that year -- including the LP's 1980 presidential candidate, Ed Clark. This also meant that Libertarian became one of five named choices for party affiliation represented by a check box on the voter registration form -- the other four choices at that time being Democrat, Republican, American Independent, and Peace and Freedom.

California election law provides two ways that a party can retain "qualified" status -- by maintaining a certain level of registration or by at least one of its candidates for statewide office receiving at least 2% of the vote.

From 1982 to 1999, the Libertarian registration in California was continuously below this level, at times by a very large margin. This was a constant concern of LPC activists at the state level, with proposals for, and from time to time actual action on, additional registration drives, though none were of anything close to the size of the initial one. But fortunately during this time in every relevant election at least one Libertarian candidate for statewide office did manage to receive at least 2% of the vote, so qualified party status was maintained during this entire period by that rule.

Both because of continued growth in the number of registered Libertarians and because of a change in the law which reduced the number required, the LPC's retention of qualified party status by this measure is no longer an issue. As of 2021, the Libertarian voter count is approaching three times the required number.

After a moderate decline in the early 2000s, statewide Libertarian registration then began rising again both in absolute numbers and as a fraction of all registered voters. This increase has been fairly steady starting in 2008, but included significant jumps associated with the 2012, 2016, and 2020 presidential elections. From the mid-2008 low to February 2021 (the most recent report available), the absolute count has more than doubled, and the Libertarian fraction of all registered voters is now slightly higher than the level at the end of the initial registration drive.

Since this recent period has not included any large-scale attempts to boost Libertarian registration for its own sake, it seems reasonable to attribute this increase over the past decade to other factors, such as: (1) increasing awareness and/or sympathy for the Libertarian brand, (2) dissatisfaction with the more established parties, and (3) a continuing replacement in the voter rolls of records representing people who were simply maintaining a past affiliation by default, with records representing people who have more recently had reason to make a choice, whether that be because they were newly eligible to vote or because they re-registered as a result of a move.

Comparison With Other Parties

There are currently six qualified parties in California. The Democratic Party has the largest number of registered voters by a significant margin, followed by the Republicans. In third place is the American Independent Party. The LP is in fourth place, followed by the Peace and Freedom Party and then the Greens.

Notes on the graph:

Significant trends over the past two decades: