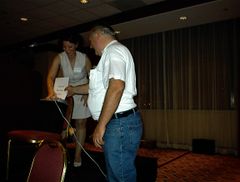 The 2003 Libertarian Party of Texas State Conference took place in the The Menger Hotel in San Antonio, Texas on June 27-28, 2003.

This conference had a number of controversies and, despite being firmly planned as a fundraising effort, lost money. Trouble started on the LPTexas email list with what amounted to a flame war between vice chair Hawley and most of the other people on the list. How much of this was known to chair DeLamar is unclear. DeLamar was not on the state list to know about any of this firsthand.

Efforts by people expected to attend to improve the conference's chances of success were consistently rebuffed. This contributed to lower than planned for attendance. 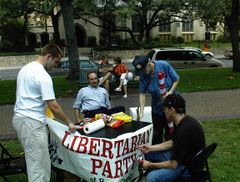 A shadow conference was held on Saturday in Travis Park a few blocks from the official conference. The shadow conference was an attempt to implement the specifications of Clyde Garland for how he would want to handle a state conference. -- held in a public park for as close to a budget of zero as possible, with no fees to attend. It was organized by James Gholston, Monica Granger, and one other San Antonio party member. Monica Granger was unable to attend.

Attendance was very low, and most attending party members attempted to make it to the main gala of the official conference. Many people at the conference were non-party members who were casually in the park and found the shadow conference to be the most interesting thing happening there. Without designated speakers or activities, it was mostly a small social gathering.