From LPedia
(Redirected from D. Frank Robinson)
Jump to navigation Jump to search

D. Frank Robinson got in on the ground floor with the Libertarian Party, visiting David Nolan's living room early in 1972, chairing the Bylaws Committee for the first national convention, and being chosen as an at-large member on the first Libertarian National Committee. Also in 1972 he became the first chair of the Oklahoma Libertarian Party. In 1974 he was Director of Research for the congressional campaign of his former boss, Republican Mickey Edwards, whose slogan was "Take a bite out of big government." Edwards fell just short of a massive upset of the incumbent and would win the seat in '76 but by that time Frank had parted ways with him over ideological differences. By 1980 the OKLP was a recognized party on the ballot for the first time. Frank ran for Edwards' congressional seat but was defeated by four votes in the OKLP's first primary by Jim Rushing. In 1984 Frank was ticketed for trespassing at the Oklahoma State Fairgrounds while gathering signatures to get the OKLP back on the ballot. The result of the subsequent lawsuit was that the right to petition on public property was upheld by the federal court. A separate lawsuit challenging the state's ballot access law cited that harassment and resulted in the party being recognized for elections that year due to court order as well as a permanent expansion of the time period to gather signatures for party recognition from 90 days to a year. Frank was one of the candidates nominated by convention that year, receiving 4,470 votes(2.5%) in the 5th Congressional District held by his old boss Mickey Edwards.

Frank continues to this day to pursue two main ideas. One is that electing Libertarians to Congress is the goal that best combines the priorities of achieveability and effectiveness in order to advance the party's agenda. The other, and more critical, notion is that the state monopolies of printed ballots that require dispensation from the state for candidates to be listed benefit the two establishment parties. Both as a matter of principle and as a means to create the basis for legal action, Frank has attempted to file as a candidate for Congress in 2016, 2018 and 2020 without submitting either signatures or a filing fee. D. Frank declines to file with official support of the LNC as a co-plaintiff. The decision of the LNC is still pending. 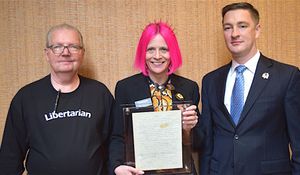