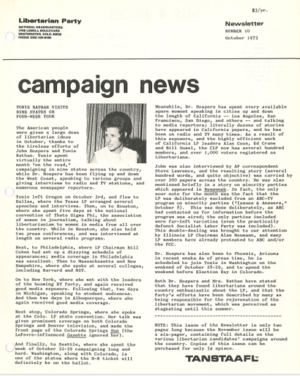 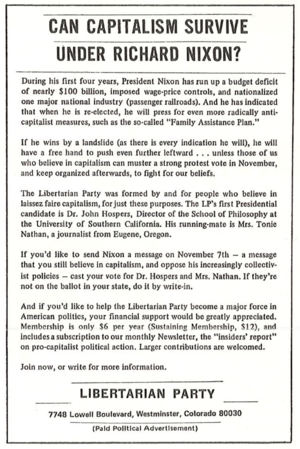 The American people were given a large dose of libertarian ideas in October, thanks to the tireless efforts of John Hospers and Tonie Nathan. Tonie spent virtually the entire month "on the road," campaigning in nine states across the country, while Dr. Hospers has been flying up and down the West Coast, speaking to various groups and giving interviews to radio and TV stations, and numerous newspaper reports.

Tonie left Oregon on October 3rd, and flew to Dallas, where the Texas LP arranged several speeches and interviews. Then, on to Houston, where she spent give says at the national convention of Theta Sigma Phi, the association of women in journalism, talking about libertarianism to women in media from all over the country. While in Houston, she also held two press conferences, and was interviewed at length on several radio programs.

Next, to Philadelphia, where LP Chairman Bill Cohen has set up a dizzying schedule of appearances; media coverage in Philadelphia was excellent. Then to Massachusetts and New Hampshire, where she spoke at several colleges, including Harvard and MIT.

And finally, to Seattle, where she spent the week of October 22-29 campaigning long and hard. Washington, along with Colorado, is one of the state where the H-N ticket will definitely be on the ballot.

Meanwhile, Dr. Hospers has spent every available spare moment speaking in cities up and down the length of California -- Los Angeles, San Francisco, San Diego, and others -- and talking to media reporters; literally dozens of stories have appeared in California papers, and he has been on radio and TV many times. As a result of this exposure, and the highly efficient work of California LP leaders Alan Coon, Ed Crane, and Bill Susel, the CLP now has several hundred members, and over 1,000 voters registered as Libertarians.

John was also interviewed by AP correspondent Steve Lawrence, and the resulting story (several hundred words, and quite objective) was carried by over 200 papers across the country. He was also mentioned briefly in a story on minority parties which appeared in Newsweek. In fact, the only sour note for the month was the fact that the LP was deliberately excluded from an ABC-TV program on minority parties ("Issues & Answers," October 8). This was done deliberately, as ABC had contacted us for information before the program was aired; the only parties included were far-left varieties (even the practically defunct Socialist Labor Party was included). This double-dealing was brought to our attention by Illinois LP Chairman Alan Newmann, and many LP members have already protested to ABC and/or the FCC.

Dr. Hospers and Mrs. Nathan have stated that they have found libertarians around the country enthusiastic about the LP, and that the Party's efforts have been described by many as being responsible for the rejuvenation of the libertarian movement, which was perceived as stagnating until this summer.

NOTE: This issue of the Newsletter is only two pages long because the November issue will be a six-pager, containing full details on the various libertarian candidates' campaigns around the country. Copies of this issue can be purchased for only 5 cents apiece.

Total LP membership (national and state) is now approximately 1,800, with an additional 2,200 supporters working for LP candidates. WE now have members in all but three of the 50 states (ND, SD, and WV) and have state chairmen in 30 states. Total funds received by the National Party and the Hospers-Nathan campaign have passed the $20,000 mark. Nearly 100,000 pieces of material, including 25,000 copies of the Temporary and Permanent Platforms have been distributed by National HQ. At least as much, if not more, has been distributed by the various state parties.

The four state chairmen who have come in since last month are:

We now have 11" by 14" copies of our Statement of Principles, reproduced from a professionally-hand-lettered rendering, available for $1 apiece (3 copies, $2). This is a very handsome item, print on high-quality textured stock. Order one today!

TO SAVE UNNECESSARY TROUBLE

Please do not order any of the following items from us. They are out of stock, or will be discontinued after the election. Atlas Shrugged Poster, Who record, H-N buttons, H-N stickers, McGovern/Decoy, all Newsletters prior to this one.

Copies of Libertarianism (paperback) should henceforth be ordered directly from the publisher (Reason, Box 6151, Santa Barbara CA 93111); price is $2.95; quantity prices on request.

If you want a copy of Where The Money Went (Willis Stone's expose of bureaucratic boondoggles totaling $180 billion), order soon; we're down to about a dozen copies. $1.25 each, 3/$3.

We will be stocking new leaflets and other goodies (buttons, stickers, etc.) after the election.

To participate in a survey of libertarians, being conducted as background research for an article on the "movement" to appear in a "major national magazine" next Spring, send a self-addressed, stamped envelope to: Polifax Survey, PO Box 20067, Denver 80220. Get as many LP members as you can to take part, so that the LP is well represented.

AD TO APPEAR IN BARRON’S

The ad shown above (reproduced 3/4 size, from a paste-up; thus the splice marks) will be appearing int he October 30th issue of Barron's, a strongly pro-capitalist financial peer that reaches 250,000 people with an average net worth of $250,000. This is costing us $550 (ouch!), and any contributions towards allaying that expense would b e greatly appreciated; please indicate that you're contribution is for this purpose.

The Student Libertarian Action Movement and the New Banner have recently issued anti-LP propaganda, calling us "impure" and "statist." SLAM has at least been courteous enough to allow us to reply to their charges, via letter int heir publication, New Libertarian Notes, but New Banner appears intent on open warfare. We urge all LP members to refrain from subscribing to NB, and/or to cancel present subscriptions. NB is a poorly-written and amateurishly produced paper of little value, in any case; if anarcho-capitalism is your bag, we'd recommend the Libertarian Forum, which is far superior in every respect.

GO BACK TO INDEX OF LP NEWS
Retrieved from "http://lpedia.org/w/index.php?title=Document:LP_News_1972_October_Issue_10&oldid=1549660"
Categories: