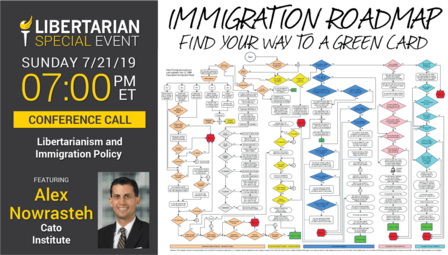 featuring
Alex Nowrasteh
Cato Institute's Center For Global Liberty and Prosperity
Director of Immigration Studies
Alex Nowrasteh is the director of immigration studies at the Cato Institute’s Center for Global Liberty and Prosperity. His popular publications have appeared in the Wall Street Journal, USA Today, the Washington Post, and most other major publications in the United States. His peer-reviewed academic publications have appeared in The World Bank Economic Review, the Journal of Economic Behavior and Organization, Economic Affairs, the Fletcher Security Review, the Journal of Bioeconomics, and Public Choice. Alex regularly appears on Fox News, MSNBC, Bloomberg, NPR, and numerous television and radio stations across the United States. He is a coauthor of the booklet Open Immigration: Yea and Nay (Encounter Broadsides, 2014).
He is a native of Southern California and received a BA in economics from George Mason University and a Master of Science in economic history from the London School of Economics.

TO RSVP
Click here and complete
the registration form

The Libertarian Party hosts a series conference calls on topics ranging from outreach, activism, current issues, and important updates on our party's progress. This webinar will last one hour and registered participants can submit questions during the webinar.

Paid for by the Libertarian National Committee
2600 Virginia Ave, N.W. Suite 200, Washington D.C. 20037
Content not authorized by any candidate or candidate committee.