Difference between revisions of "Libertarian Party of New York"

The Libertarian Party of New York ("LPNY" in party bylaws) was one of the first Libertarian parties to organize and run candidates in the US. It was originally named the "Free Libertarian Party" to prevent confusion with New York's Liberal Party. Its first state chair was Ed Clark.

You can now register to vote as a member of the Libertarian Party in New York. About enrolling as a Libertarian in NY

To find out about local meetings near you in NY, please see the LPNY Chapter Meetings page

The Libertarian Party holds an annual convention, where its five officers and five At-Large board members are elected. Those 10 people, the immediate past chair (if any), plus one representative from each recognized affiliate, comprise the LPNY State Committee. The LPNY State Committee conducts business on the lpny_committee mailing list, which every LPNY member is encouraged to join (read-only for non-committee members).

The Libertarian Party was established in 1971 and soonafter many states started to work to form state parties. In New York, the party became known as the "Free Libertarian Libertarian." On April 22, 1972, the first meeting of the New York Libertarian was held, in which Ed Clark was elected Temporary Chair.

In the June—July 1972 edition of The Libertarian Forum, Murray Rothbard reported that he joined the Academic Advisory Board for the party. Founding members of the party include Edward and Alicia Clark and Jerome J. Klasman. Clark served as the Temporary State Chairman as early as April 1972, when Guy Riggs was running for State Assembly, as one of the first Libertarian candidates in the state. Two other Libertarians ran as candidates in 1972: Walter Block for State Assembly and Gary Greenberg for U.S. House.

In late October, Riggs suspended his campaign after he received only 900 out of the required 1,500 petition signatures to get on the ballot. It was reported that his campaign received nationwide attention including a network radio commentary. Riggs' campaign committee went on to form the Mid Hudson Libertarian Club. The first meeting of the Mid Hudson Libertarian Club was held in late September 1972. By this time, Jerome J. Klasman was Temporary State Chair and was guest speaker to the club's first meeting. From this club, Sanford Cohen announced in candidacy for U.S. House for the 25th congressional district in January 1973. The club continued to hold regular meetings throughout the early-to-mid 1970s.

The Free Libertarian Party held its founding convention on the weekend of March 29—April 1, 1973 at the Williams Club in Manhattan. Rothbard gives an account of the convention in the April 1973 edition of The Libertarian Forum. The following is an excerpt describing his observations of the people, reporting that there were about 95 in attendance:

"To end the suspense, dear reader. I entered the Williams Club a hopeful skeptic and emerged, exhausted but enthusiastic, forty-eight hours later a celebrant. To my joyful surprise, here was a group of men and women almost all intelligent, dedicated, and knowledgeable about liberty. Here, despite a predictably wide spectrum of temperaments and ideologies, despite occasional emotional hassles, yes despite a twelve (or was it thirteen) hour session on amending the by-laws, here was a group of attractive and intelligent young people who almost literally exuded a spirit of warmth, love, and respect for each other and for the common cause. It was truly a sight to behold. At the risk of being maudlin, I affirm that it was indeed a privilege to be present at the creation of the Free Libertarian Party of New York.

As we shall see further below, the “instincts” of this rather large group of people (approximately 95) were remarkably sound: a blend of high libertarian principle and good common sense and mutual respect that is all too rare in or out of the Movement. And these were Real People; gone was the old predominance of hophead kids, stoned out of their minds and mumbling about “freedom”. These were young people with feet on the ground, who do things, who work in the world: scholars, engineers, television people, advertising men, civil servants. I would say that the typical FLP member is an ex-Objectivist with none of the unfortunate personality traits of the latter, who has been moving rapidly into, or on the edge of, anarcho-capitalism. But both the anarcho-capitalists and the sizable minority of limited archists (or “minarchists”, to use the happy phrase of Sam Konkin), showed a happy willingness to work together for the large spectrum of common ends.

And then, wonder of wonders to a veteran of the New York movement, there was actually a sizable number of girls at the Convention, ranging moreover from attractive to ravishing (and if this be Male Chauvinism, then make the most of it!) It was also a standing wry joke in the New York movement that the proportion of females ranged from zero to somewhere around one per cent: surely this new quantum leap is a fine omen for the growth and success of the movement. Furthermore, I had personally met no more than a dozen of the delegates before — and this in a movement whose members for a long while barely spilled over the confines of a small living room!"

The party went on to adopt a set of bylaws and then discussed adopting a party platform. The platform committee was presented with what Rothbard referred to as a "Randian archist platform" by Paul Hodgson. To offset this, the anarchists submitted a minority platform. However, neither platform gained any traction and it was decided to move forward with no state platform. The following day, April 1, 1973, state officers were elected. Andrea Millen, a TV producer, was elected Chair. Howard Rich, a candidate in Rockland County was elected Vice Chair along with Dr. Raymond Strong, leader in the Brooklyn party. Mike Nichols was elected Secretary and Jerome J. Klasman was elected Treasurer. There were also three At-Large positions, and those elected were Gary Greenberg, an attorney, Samuel Edward Konkin III, Editor of New Libertarian Notes, and Joe Castrovinci.

In 1973, it ran a slate of candidates in the New York City municipal elections including Fran Youngstein for mayor and Gary Greenberg for Manhattan district attorney. The LPNY has run statewide candidates regularly since 1974 when its candidate for governor was Jerome Tuccille.

"It is a measure of the state of the Free Libertarian Party of New York that our marathon annual convention (March 29-31) was scarcely enough to finish the Party business. This despite a preceding Special Convention at which we wrangled over the party logo and chose delegates to the National Convention in Dallas in June, and despite the fact that the Convention began every morning promptly at 10:00 A. M. and lasted through special caucuses and post-mortems until after the bars closed at 3:00 A. M. Yet we concluded with no resolutions on issues and no platform. these being put back to yet another mini-convention at the end of April. Three conventions in two months begins to resemble the unfortunate and frenetic Peace and Freedom Party of 1968, which reached a crescendo of almost continuous conventioneering before its rapid demise."
— The Libertarian Forum, April 1974

"Meanwhile. New York's Free Libertarian Party has had its annual spring convention. Your editor is living in California for the spring, and so was not able to attend, but from all reports the convention was almost remarkably smooth and harmonious, free of the factionalism and of the barely suppressed hysteria of the year before. In a personal triumph, the able but formerly widely attacked Gary Greenberg has been elected state chairman."
— The Libertarian Forum, April 1975

In the early 1980s, a Platform Committee was formed to build the platform of the party. Steve Schneider and Bill McMillen were among the members.

In 1987, a new publication, Free New York, was created as a newsletter for the party.

In 1994, Howard Stern sought the Libertarian Party nomination for Governor of New York and won the nomination at the State Convention. However, he later dropped from the ticket due to his refusal to disclose his financial records. The nomination of Stern was controversial, in that supporters saw this as an opportunity for major party status, while others saw this as a threat to libertarian principles.

The 1998 State Convention was held in Poughkeepsie, where Christopher Garvey and Donald Silberger were nominated to head the Governor / Lt. governor's ticket. Conti and Goodman also ran for statewide offices. Bill McMillen and Ambassador Alan Keyes are candidates for U.S. Senate, and McMillen is given the nomination. Among the noted speakers at the convention included Sharon Harris, Michael Cloud, John Cushman, Ron Crickenberger, and Muni Savynon. Jim Harris was voted as the new state chair.

In July 1998, delegates from New York attended the national convention in Washington, D.C. David Bergland served as chair and Muni Savyon as Regional Representative. In August 1998, the LPNY handed over 27,862 signatures in Albany to get the statewide candidates on the ballot.

In 2006, Bill Weld sought the Libertarian Party's nomination for governor, but later declined.

In April 2015, Mark Glogowski was elected chair, and there began a rapid growth of forming new county chapters, especially in Western New York, where Libertarian Party activity was not as active. The Chapter Development Committee was formed, in which Phil Ricci served as first chair, and Jim Rosenbeck took over later in the year.

In April 2016, the convention was held in New York City, in which a debate was hosted for the Presidential and Vice Presidential candidates. Gary Johnson, Austin Petersen, John McAfee, Marc Allan Feldman, Vermin Supreme were among those in the debates. 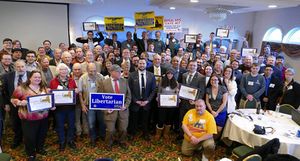 In April 2018, Larry Sharpe became the party's nominee for governor. He had begun his campaign in July 2017, running an active campaign across the state. Jim Rosenbeck was elected chair at that convention.

Sharpe ran the most active campaigns in the party's history, with many media appearances, events, a huge social media following, and a spot on the debate stage. On Election Day, he received over 95,000 votes, securing ballot access for the LPNY for the first time.

Following Election Day, a Party Rules Subcommittee was created under the Administrative Division to create a rules document that complies with Election Law. Following a series of discussions on different versions of rules, a set of rules drafted by a subset of the subcommittee filed rules with the New York State Board of Elections on December 24, 2018. The State Committee formally endorsed those rules on January 6, 2019. The rules created a Transition Committee, which is tasked with facilitating the transition from January 2019 until the spring 2019 convention. This committee was replaced by the Interim State Committee on February 10, 2019, which held meetings on February 24, March 10, and March 31.

The 2019 convention is scheduled for May 4-5, 2019, in which many important decisions will be made to move the party forward.

Main article: Leadership of the Libertarian Party of New York

Main article: Committees of the Libertarian Party of New York

See also: List of Chairs of the Libertarian Party of New York

In the beginning of its history, the Free Libertarian Party made provisions in its bylaws to form local/regional Libertarian clubs.

Unchartered in the 1970s