"Close the Back Door" was a successful initiative organized by Caryn Ann Harlos with a goal of amending the National Party Bylaws to add an additional self-protection clause (force-field) to Article 17 of the National Bylaws at the 2018 National Convention to ensure that the original intent was preserved and honored.

At the 1972 National Convention, the Party founders decided that the future of the Party would be guided by a Statement of Principles with a near impossible 7/8 super-majority and super-quorum for amendment. In order to ensure this procedure, they protected the bylaws specifying this standard with an additional 7/8 super-quorum and super-majority amendment requirement, believing that this completely accomplished their intent. However at the 2008 National Convention, The Bylaws Committee put forth an argument that the founders left a back door open that would allow the Statement of Principles to be amended with a 2/3 vote by a series of steps. The following is excerpted from its report:

The chair fielded a challenge from Dean Ahmad to the matter – the proposal on the Statement of Principles – being in order. The Chair ruled the matter in order. Dean Ahmad appealed the ruling. A motion to table was ruled out of order. The discussion centered on the language requiring the 7/8 requirement which was about to be amended with a 2/3 majority. After the question was called and the matter put to a vote, the chair’s ruling was overturned, and the Statement of Principles item stood out of order. This was confirmed with a standing vote.[1] Daniel Lewis moved to suspend the rules to consider the question of the ‘padlock’ proposal, motion #4 of the Statement of Principles item. An intervening motion to suspend the rules was ruled out of order. The motion failed.

Implications for Dallas Accord

Interestingly (and in the opinion of some, deceptively), the Bylaws report did not mention that the changes proposed that would have created a Statement of Principles that allegedly all Libertarians could be proud of would have excised a significant portion of the changes made in conjunction with the Dallas Accord once again marginalizing (or at least might be perceived to be marginizing) Party anarchists. It is the opinion of some that the Bylaws Committee suffered from overreach and if it had simply stuck to striking the "cult of the omnipotent state" language it would have succeeded. During arguments for the the 2018 revisions, Harlos argued that she would have accepted that as a compromise in order to close the back door if she were present at that convention. 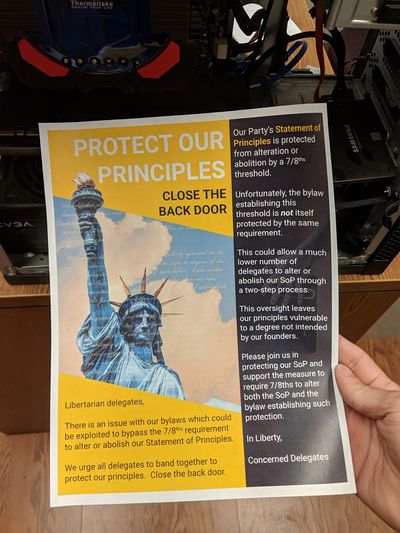